All the occasional debates about Ghana being a secular state did not appear to matter on Wednesday, as the call for national prayers in a time of coronavirus pandemic was met with widespread institutional obedience.

Prayer sessions, wailing and song ministrations has been the order of the day across the 16 regions as Ghana reached 68 cases with two deaths. 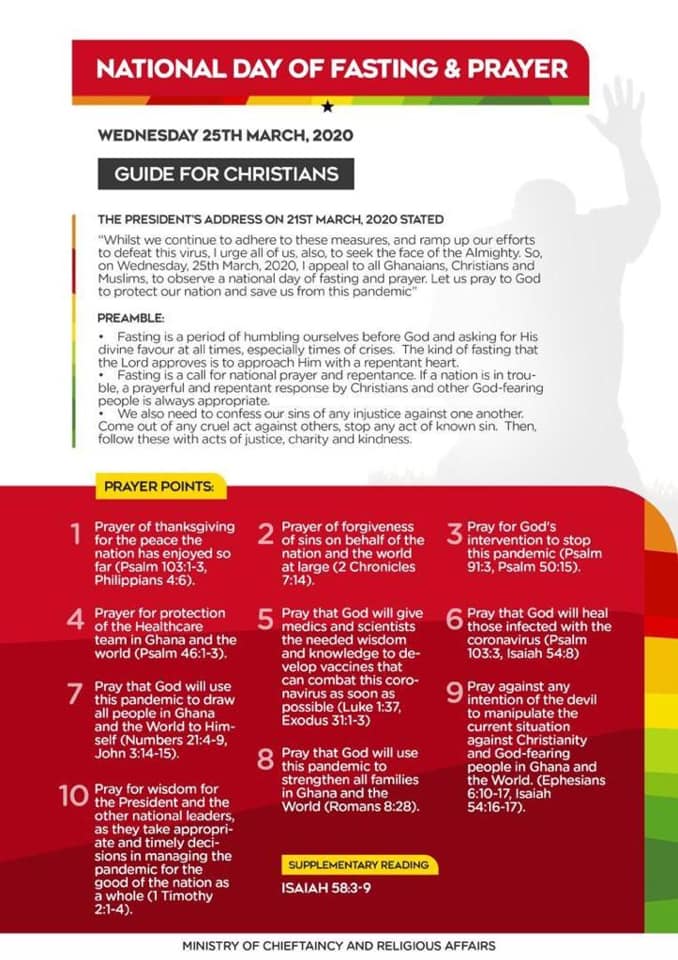 Social media is awash with spiritual posts, bible quotations, videos of preaching, motivational messages and prayers with hashtags #NationalDayOfPrayer, #NationalDayOfFastingAndPrayer and #FastingAndPrayers trending at number one, two and three respectively on Twitter.

TV stations, radio stations and other broadcast channels had a change of programming to reflect the prayer mood and the typical political discussions, heated debates and interviews have been relegated.

Wherever you are today as a Ghanaian, lift up prayer to the Most High, agree with others across the nation, for the power of God to heal our land 🇬🇭 🙏❤️🔥 #NationalDayOfPrayer

Media channels, which are ordinarily loud with ear-splitting secular music, organised a series of worship songs sandwiched with the preaching of renowned pastors. 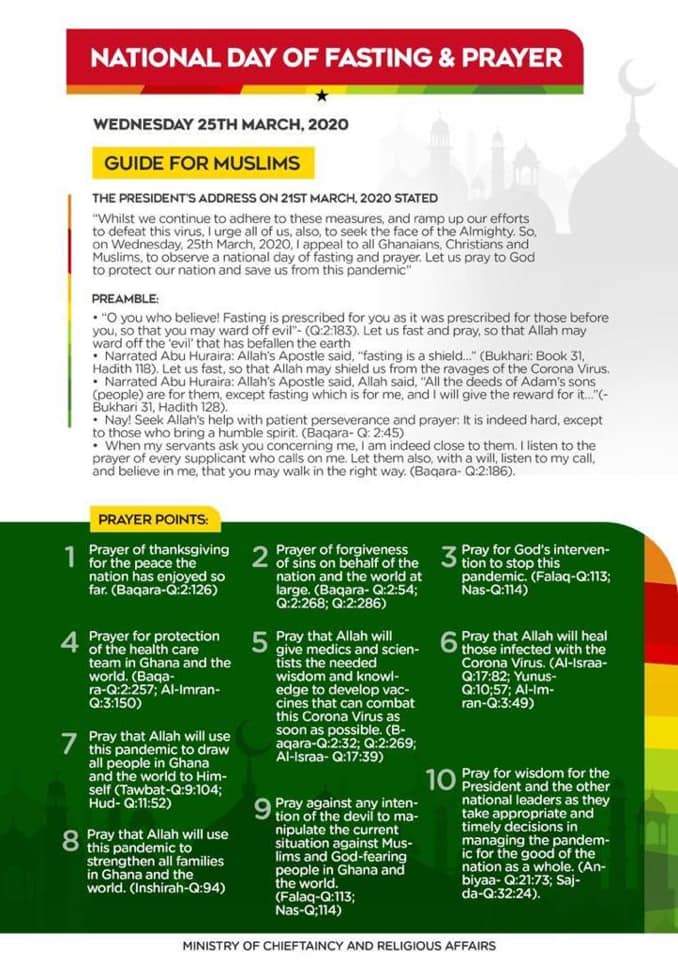 Public offices, firms and organisations had business meetings replaced by fellowships and small gatherings to invoke the spirit of God. Notable among them was the Judicial Service Secretariat who turned their office into a spiritual battlefield with loud prayers.

Security services and other agencies were not left out as the Ghana Prisons Service organised a live-streamed devotion at its headquarters in Accra. Participants stayed about one metre apart to reflect the social distancing, preached as a way to contain COVID-19 spread.

The little you can do for your Country is to pray for it. Make it a priority to take party in the #NationalDayOfPrayer pic.twitter.com/extTY42Dzd

General Overseer of the Perez Chapel, Bishop Charles Agyin Asare, offered prayers on JoyNews and called on God to intervene at the country’s point of need.

He said God answered prayers of his flock and cited the rescue of the ancient Assyrian city of Nineveh at the time of Jonah, as recorded in the Bible.

Striking a balance in Ghana’s inter-faith tolerance, renowned Muslim cleric Sheikh Aremeyaw Shaibu, joined to offer prayers in Arabic. The spokesperson of the National Chief Imam quoted scriptures from the Quran as he sought the favour of Almighty Allah.

GHANA 🇬🇭 WILL SAVE THE WORLD 🗺
There is a revival in the Spirit
Rise up and engage the Heavens 🙏
Remember Violent takes it by Force
🔥🔥🔥🔥🔥🔥🔥🔥🔥🔥🔥
The believe in Technology and Scientists but we believe in the POWER of God 🔥🙏 #NationalDayOfPrayer pic.twitter.com/8nnunqeket

The last time national prayers were offered during a crisis was in 2007 when Ghana’s hydroelectric dam at Akosombo almost dried up. The dam is the primary source of hydroelectric power generating units in the Eastern Region which feeds the national grid.

Pastors and other men of God had to be assembled to pray for heavy rains to fill the dam.