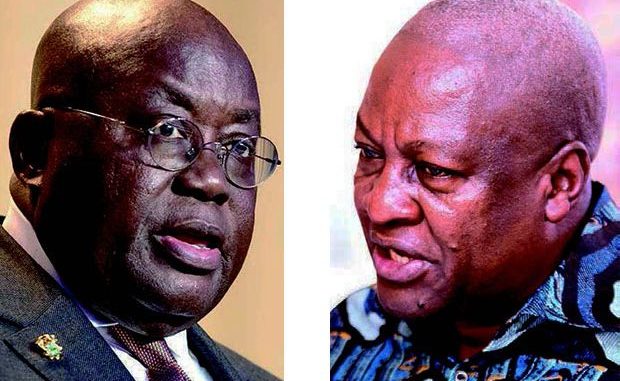 Ghana is not making progress in its anti-corruption fight, the latest Corruption Perception Index (CPI) has shown.

The country scored 41 out of 100 and ranked 80 out of the 180 countries/territories assessed annually by the global anti-corruption body.

Ghana’s scores from 2012 to 2019 indicate that the worst performance within the period was recorded in the last three years. Even though the country’s performance has generally been unimpressive, things appear to be getting worse under the presidency of Nana Addo Dankwa Akufo-Addo.

Ghana’s worst score under the John Mahama administration was 43 while the country’s best score in the three years of Akufo-Addo’s presidency is 41. John Mahama’s best score was 48 in 2014.

Nana Addo Dankwa Akufo-Addo rode on the moral high horse of incorruptibility to the presidency. In the 2016 election, he promised to fight corruption and restore integrity in the public sector if voted into office. After winning the election, however, his critics say that fight has been done with only his lips. 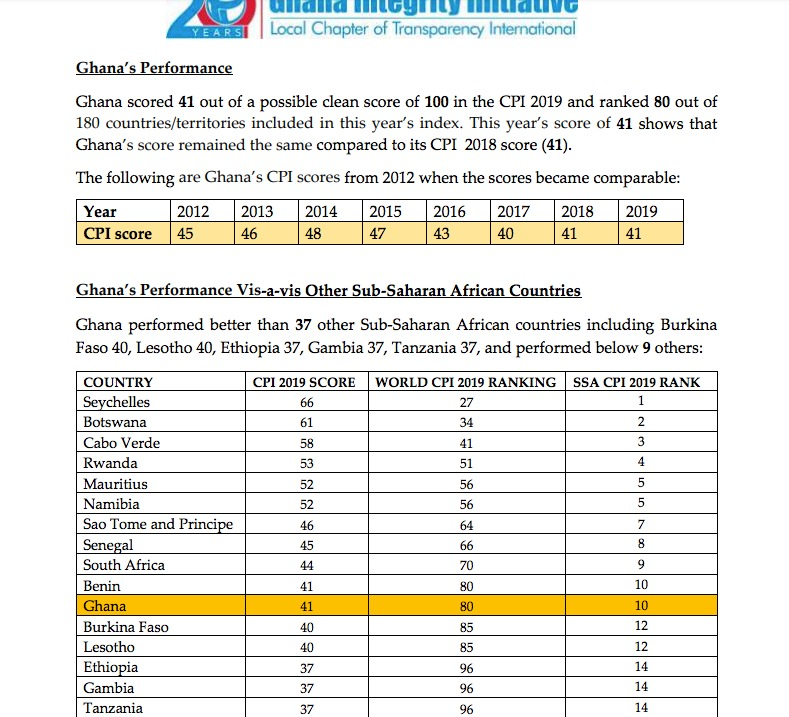 According to his critics, the body language of President Akufo-Addo has not given an indication that he hates corruption and is prepared to tackle the monstrous canker head-on.

In 2017, for instance, President Akufo-Addo came under a barrage of criticism when he openly praised and subtly endorsed the operations of the Jospong Group of Companies, a business conglomerate which has been exposed in a number of high profile corruption scandals in Ghana and beyond.

In 2013, for instance, the World Bank banned Zoomlion, from participating in any World Bank-funded contracts because Zoomlion “paid bribes to facilitate contract execution and processing of invoices.” It was in relation to a World-Bank-funded sanitation contract Zoomlion had won in Liberia.

In Ghana, Zoomlion was exposed in the GYEEDA Scandal and its sister company, Subah Info-Solutions was also fingered in the Subah Scandal, in which the company received nearly 100 million cedis to monitor revenues of telcos but there was no evidence of work done.

In 2017, Zoomlion and its sister companies were also exposed in the Robbing the Assemblies Documentary by JoyNews’ Manasseh Azure Awuni. That investigation revealed that the company had almost crippled the assemblies in Ghana through multiple sanitation contracts fraught with fraud.

In 2018, the Commission on Human Rights and Administrative Justice (CHRAJ) presented a report to the Ministry of Justice and Attorney General in respect of monies paid to Zoomlion for the Sanitation Improvement Package contracts with the assemblies in Ghana. CHRAJ, acting on a whistle blower’s report, showed that Zoomlion had received payment when the service was not delivered.

The Attorney-General is yet to act on this and the docket submitted by the Police CID on payment of over 200 million cedis paid to Zoomlion and it’s subsidiaries for fumigation contract with the Local Government and Rural Development Ministry, when similar fumigation contracts existed with all the assemblies in Ghana, where the ministry’s fumigation was to be carried out.

The Auditor General also implicated Zoomlion in another shady fumigation contract with the Ministry of Health and paid for by the National Health Insurance Authority. The Auditor-General said Zoomlion was a fraudulently paid over 180 million cedis by the NHIA, and therefore disallowed and surcharged the amount to the company and government officials who paid the money. Zoomlion is challenging the surcharge in court.

The NPP condemned the Mahama administration and Jospong Group over these acts of corruption when it was in opposition.

In November 2016, Candidate Akufo-Addo and his New Patriotic Party (NPP) held a press conference and accused John Dramani Mahama of conniving with Zoomlion to defraud the country through its GYEEDA contract.

When the NPP won the election, however, the Akufo-Addo government extended the very deal they said was fraudulent for two years.  The contract expired in February 2013 and had not been renewed.

The original contract, which had been signed in 2011 for two years, was single-sourced and did not go through any approval by the Public Procurement Authority. The GYEEDA Committee set up by the government in 2013 revealed a number of fraudulent conducts by the company that cost the nation close to 100 million cedis in the two-year period of the contract from 2011 to 2013.

Between 2013 and 2019, this deal cost the government of Ghana One Billion, six hundred and twenty million Ghana cedis (GHc1,620,000,000) even though it had no written agreement.

Apart from allowing this and other such contracts of the Jospong Group to continue, President Akufo-Addo paid a visit to Jospong’s companies and praised him.

“When you are at the forefront of doing things like you are, you will be the subject of controversy, it goes with the territory. I know you a little bit, and I know you are capable of handling it. Stay focused,” the president encouraged him.

Ameri, GYEEDA, PDS scandals show we are not fighting sleaze – House of Chiefs

The Executive Director of the Ghana Integrity Initiative, Linda Ofori Kwafo, said the president’s conduct was in bad taste. When she was asked if the comment could cloud the ongoing investigations, Mrs Kwafo said: “It has the potential to and that is where my disappointment is.”

“We are only hoping that this kind of endorsement will not cloud the judgement of any investigative institution that is doing any work,” she stated on Joy FM.

In recent times, a number of ambassadors have spoken about the corruption in Ghana.

In September 2019, the Netherlands’ Ambassador to Ghana tasked the country to pursue a “Ghana beyond corruption” agenda as the government has officially launched its ‘Ghana beyond aid’ policy.

“…your official policy is ‘Ghana Beyond Aid’; why not Ghana beyond corruption?” he asked.

In December 2019, the U.S. Ambassador to Ghana, Stephanie Sullivan, charged Ghana to fight corruption or risk losing investments. “Corruption is not a victimless crime, it actually involves stealing directly from people,” she said at a programme organized by the Ghana Integrity Initiative.

The Danish Ambassador to Ghana, Mrs Tove Degnbol, was not only worried about corruption but the fight against institutions and individuals working against corruption in Ghana.

“As we are approaching an election year, the attacks against integrity institutions and individuals contributing to fight corruption seem to be on the increase. This is noted with a lot of concern by many in the international community.

“The Auditor-General has said you cannot fight corruption without corruption, fighting you. This is sad. But apparently true in Ghana, where constant attempts to challenge mandate and personal integrity and systematic hindrances of efforts to fight corruption seems to be the prize to pay for those brave enough to take up the fight,” she added.

President Akufo-Addo says he had caused every corruption allegation against his appointees to be investigated, his critics say the so-called investigations are only meant to clear his appointees. This has earned the president the nick-name “Clearing Agent”

For instance, the President cleared officials of the Sports Ministry of wrongdoing after a supposed BNI investigation into the Australia Visa Scandal. Even though the scandal occurred, no official was prosecuted.

In the latest ranking released on Thursday, shows that in 2019, while Ghana performed better than Burkina Faso and Lesotho, the country lags behind countries like South Africa, Senegal, São Tomé and Príncipe, that scored better than Ghana in 2018.

The trends show that President Nana Addo Dankwa Akufo-Addo, regarded as an apostle of the anti-corruption fight is recording the worst figures on the index since 2017.