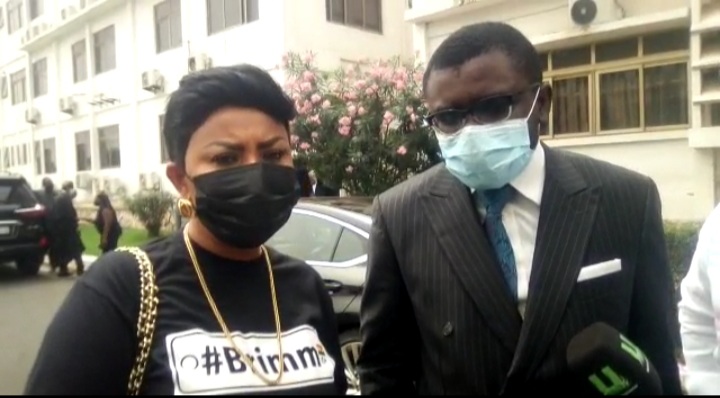 The Accra Circuit Court has discharged versatile actress Nana Ama Agyemang McBrown after she testified in Bull Dog’s case in which he threatened President Akufo-Addo.

The actress and host of UTV’s United Showbiz was cross-examined by Bull Dog’s counsel, Jerry Avenorgbo.

She gave an account of what she believed Bull Dog had said at the time he made threatening comments that suggested President Akufo-Addo will not complete his first term in office if he failed to pay Menzgold customers.

McBrown emphatically said she made Bull Dog retract the said comment he made on the show before he left.

The video in contention was also played in open court.

Why McBrown is in court

The versatile actress was hauled before the court to testify in the case in which Lawrence Nana Asiamah Hanson, known as Bull Dog is standing trial for allegedly threatening President Akufo-Addo.

The artist manager is alleged to have said “President Nana Addo Dankwa Akufo-Addo will not finish his four-year term if he failed to pay customers of an alleged Ponzi scheme by Menzgold’ on UTV’s United showbiz.

Hanson earlier denied the charge of “offensive conduct to breaches of the peace.”

The prosecution led by Chief Inspector Simon Apiorsornu has retaken the plea of Hanson and re-read the facts of the case after amending the charge sheet and the facts.

The new facts as presented by the prosecution were that the complainants in the case are citizens and regular viewers of the UTV program dubbed “United Showbiz,” hosted by Nana Ama Agyemang Mcbrown, live every Saturday between the hours of 9 pm and 11 pm.

Chief Inspector Apiorsornu said during the January 9th edition of the programme, the issue of Menzgold was raised and Hanson quickly responded that “The President of the Republic, Nana Addo Dankwa Akufo Addo will not finish his four-year tenure if he failed to pay Menzgold customers.”

The Prosecution said on January 11, the Police intercepted the said video recording on the Facebook page of UTV, which attracted many comments from viewers who watched and heard the accused making those “unguided” comments.

In the course of the investigations, the Police requested the original video recording from UTV and it was played to the accused and he admitted having made those comments.

The Prosecution said the original video, which was in Twi and English language was forwarded to the Ghana Institute of Languages for transcription and the same was transcribed into the English language.

What happened in court on Wednesday

JA: Tell the court how are you know the accused?

NAM: I am a TV show host on UTV and the accused is a panelist on the show

JA: You caused a witness statement to be filed on your behalf, correct?

NAM: Yes, I was called by the CID

JA: Kindly, have a look at this document and confirm if that is indeed your signature appended to the statement

NAM: My Lord, that is my signature and the police assisted me to write

(Witness statement, together with the attached files adopted as evidence)

JA: You agree this whole discussion is about Menzgold?

NAM: It is an entertainment show

JA: You also agree that those statement on shows help rating of the programme right?

JA: Is there anything wrong with talking about Menzgold on your show?

JA: Is there anything wrong about expressing pain about your money at Menzgold on a program like this?

JA: Can expressing pain about your money in Menzgold breach the peace in the country?

(Prosecution objects to the question)

JA: Does expressing pain about your money in Menzgold trigger chaos, anger, dispute in the public?

(Prosecution objects again, the question is just being rehashed)

JA: Did Bull Dog act on what he said?

JA: Did Bull Dog retract what he said?

JA: After the show, have you heard anywhere Bull Dog is gathering people to activate what he said?

NAM: No, I haven’t seen or heard anything like that

JA: Did what Bull Dog say on the show put you in a state of fear?

JA: Do you recall Afia Schwarzenegger asking Bull Dog if he was threatening the President?

NAM: Yes, it is even in the video

JA: Do you recall Bull Dog saying, don’t put words into my mouth?

NAM: Yes, it is in the video