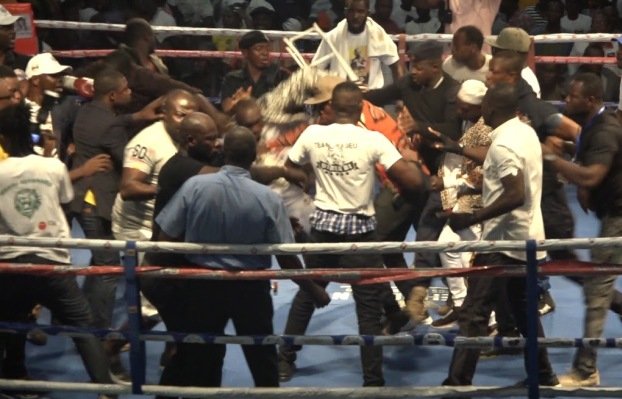 The incident occurred at one of the indoor boxing halls at the Bukom Boxing Arena, where the bout was staged on Saturday, October 13.

The violence began, when fans of Sackey thronged the ring in anger to attack referee Adorn Bertin from Benin for what they claimed was a wrong refereeing decision.

Referee Bertin who had adjudged title holder Sackey unfit to continue the bout for going on the canvas for the second time, stopped the match in the second round in favour of challenger Wasiru.

Sackey’s corner led by his trainer, Akai Nettey charged on the referee, which incited their fans to rowdily react in registering their displeasure.

Fans of Wasiru also responded in their bid to protect their boxer leading to the ugly clash of both section of fans in the ring.

The chaotic scenes in the ring escalated around the hall with other fans running for their lives.

Referee Bertin was hit with one of the chairs that was being hurled around the hall.

Security personnel present were overpowered, as they could not control the violent crowd until a reinforced team was called in to restore calm.

But before the reinforce security forces could come in several properties were damaged, including chairs and door glasses at the hall.

There were no major casualties but the Ambulance Service personnel told the GNA Sports that, they treated some minor injuries and were discharged.

It is unclear what would happen to both boxers but Authorities say they would respond at the appropriate time.

Lukaku, Werner Score in Their First Games Away From Chelsea