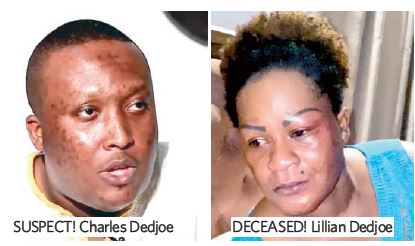 The defence in a case where a business executive allegedly killed his wife Lilian Dedjoe, has slammed the opposing legal team over attempts to halt funeral processes for the deceased.

The accused person, Prince Charles Dedjoe had dragged his wife’s family to court over an attempt to start the funeral processes of his late wife in his absence.

He wanted the Accra High Court to order the family to stop all processes since he is still in police custody, awaiting the determination of his murder trial.

On Wednesday, June 9, the family’s counsel Afua Brown-Eyeson, who was expecting to hear the accused person’s legal team led by Captain Nkrabea Effah-Dartey on why his wife should not be buried in his absence, was left disappointed.

Captain Effah-Dartey rather sent in a letter explaining his absence on Wednesday, just minutes before the case was called.

The letter stated that Effah-Dartey was not well and had been advised to go to the hospital.

“I have just been given a letter from the plaintiff applicant counsel (Effah-Dartey) seeking an adjournment to June 23, 2021, on medical grounds without any attachment whatsoever,” the trial judge, Rebecca Sittie read the letter explaining counsel’s absence.

Brown-Eyeson, who is defending the deceased’s family, confirmed that she had received a copy of the letter.

Bu she pointed that this was just a deliberate attempt to delay the court from ruling on the substantive issue regarding the funeral processes.

“At the last adjourned date, one of the associates of the firm Nkrabea and Associates represented the plaintiff applicants and requested for a short adjournment for this matter as they were served three days before the last hearing date and as a result, needed more time.

“Their request was granted so this letter is calculated to waste everybody’s time as the letterhead shows 15 associates at the law firm who can easily move this application on the lead counsel’s behalf.

“Clearly, there is no authority for the applicant’s application and suit either in common law, equity or customary law, and that is why they (referring to Effah-Dartey’s team) are not here,” she stressed.

She then urged the court to proceed to hear her arguments in opposition to the application that is asking family members of late Lilian Dedjoe to halt funeral processes.

The trial judge gave Brown-Eyeson the go-ahead to make her case in the absence of the plaintiff’s counsel.

Brown-Eyeson said per the law, the corpse is for the extended family and not the nuclear family the deceased formed with Prince Charles Dedjoe.

The counsel subsequently urged the court to dismiss the application and also award cost benefits to the family.

After listening to her submission, the Accra High Court set June 15, to rule on the matter. Meanwhile, the substantive case which is ongoing at the Madina Circuit Court is still pending.

“At about 3:20 am on the said day, he rushed out from bed upon hearing his wife scream only to find her lying unconscious on their staircase”.