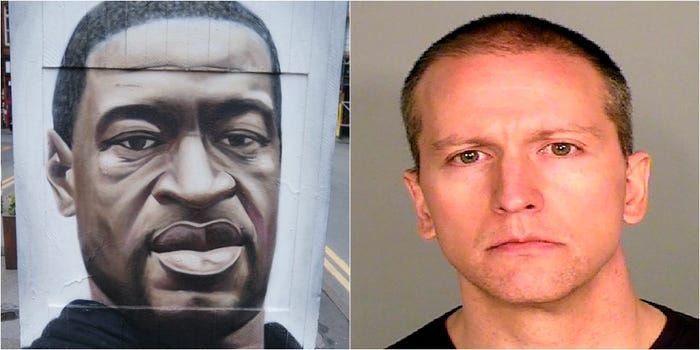 The jury in the murder trial of former Minneapolis police officer Derek Chauvin found him guilty on Tuesday in the killing of George Floyd last May.

After a three-week trial and 10 hours of deliberation over the past two days, the 12-person jury, consisting of six white and six Black or multiracial men and women, concluded that Chauvin was guilty of all three charges.

Chauvin’s bail was immediately revoked and he was escorted out of the courtroom with his hands cuffed behind his back. He will face sentencing in a matter of weeks and could be sent to prison for decades.

Shouts of “Say his name! George Floyd!” and “Guilty on all three!” were heard among the crowd.

Prosecutor Steve Schleicher argued that Chauvin, who is white, used excessive force while detaining the 46-year-old Floyd, who was Black, after arresting him for allegedly using a counterfeit $20 bill to buy cigarettes.

The prosecution was able to convince the jury that Chauvin, who pressed his knee on Floyd’s neck for nine minutes and 29 seconds, was responsible for Floyd’s death.

“Random members of the community, all converged by fate at one single moment in time to witness something, to witness nine minutes and 29 seconds of shocking abuse of authority, to watch a man die,” Schleicher said in his closing arguments on Monday, adding that Chauvin’s “use of force was unreasonable. It was excessive. It was grossly disproportionate.”

“This wasn’t policing. This was murder,” he said.

The prosecution called 38 witnesses and played video of Floyd’s death on May 25, 2020, dozens of times over its 11-day presentation.

“This result is not surprising at all. As the trial went forward, it seemed that every witness was putting a further nail in the coffin of the defendant,” Mike Padden, a Minneapolis lawyer, told Al Jazeera after the verdict was read.

“The defence never had any viable defenses. You are seeing the magic of video. Video doesn’t lie.”

Chauvin’s defence lawyer, Eric Nelson, failed in planting seeds of reasonable doubt in the minds of the jurors by arguing that there were other underlying conditions – specifically, his drug use and pre-existing health issues – that resulted in Floyd’s death. Nelson also argued that Chauvin acted “as any reasonable police officer would”.

“In this case, the totality of the circumstances that were known to a reasonable police officer in the precise moment the force was used demonstrates that this was an authorised use of force, as unattractive as it may be. And this is reasonable doubt.”

It is expected that Chauvin will appeal the verdict and, following closing arguments on Monday, Judge Peter Cahill suggested he may have a case, thanks to public comments from Democratic Representative Maxine Waters, who told a crowd of protesters “we’ve got to get more confrontational” if Chauvin was found not guilty.
Nelson had asked for a mistrial, arguing Waters’ comments could have influenced the jury. Cahill rejected that request but suggested that Waters “may have given you something on appeal that may result in this whole trial being overturned”. He called her comments “abhorrent” and “disrespectful to the rule of law and to the judicial branch”.

Tensions are running high in cities around the US, no more so than in Minneapolis, which also saw the killing of another Black man at the hands of police in nearby Brooklyn Center on April 11.

After 20-year-old Daunte Wright was shot and killed by a police officer who claims to have mistaken her gun for a Taser, protesters hit the streets demanding justice and calling for police reforms.

They were joined in their calls by President Biden and other Democratic politicians, who are urging the US Senate to pass a police reform bill named after Floyd that has already passed the House.

It was Floyd’s death last May in Minneapolis that sparked racial justice protests in the US and around the world that at times turned violent on the part of the protesters and, in some cases, on the part of law enforcement.

In Minneapolis, businesses have boarded up their windows and around 3,000 National Guard troops have been called in to help keep the peace, as they have in other large cities such as Washington, DC.