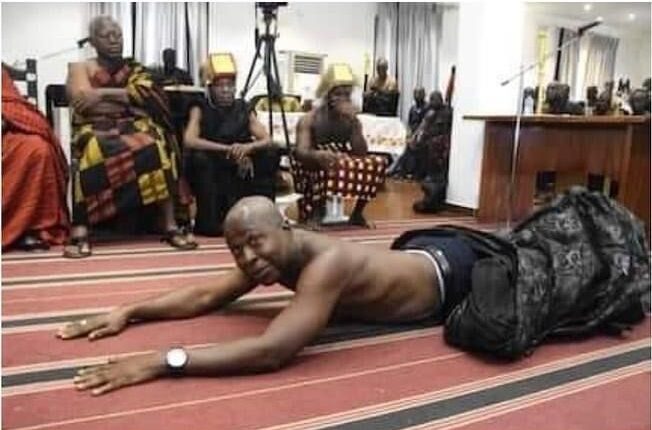 The Benkumhene of Asamang Tamfoe Traditional Area, Nana Boakye Darkwa is demanding a refund of an amount of Ghc115,000 mining proceeds given to Ofori Panin Fie out of mining in the community.

Addressing the media on Wednesday, October 30, the Benkumhene explained that; “As part of a corporate social responsibility agreement the community has with the miners which Xtra Gold is privy to, some mandatory monies were paid by the miners and which is lodged in an accredited account in the name of the community.

“Asamang -Tamfoe recognizing and acknowledging the throne of the Ofori Panin forked out 115,000 Ghana cedis on 7/10/2022 as a goodwill money to Ofori Panin Fie.”

He added that, if the Judicial Committee chaired by Okyenhene Osagyefuo Amoatia Ofori Panin, describes the community mining program as illegal hence his destoolment, then, his money should be refunded since it was from its proceeds.

The order by the overlord of the Akyem Abuakwa followed a petition by a group of residents in the community, calling itself the Concerned Citizens of Asamang Tamfoe.

Among other things, they accused the Benkumhene of engaging in illegal mining, causing pollution of rivers, degrading farmlands, and threatening food security and livelihoods.

The Akyem Abuakwa Judicial Council then summoned the Chief of Asamang-Tamfoe Osabarima Kwame Koh II and the Benkumhene Nana Boakye Darkwa to appear before it on November 21, 2022, for a hearing which they complied.

After being asked several questions, the Benkumhene admitted guilt and laid prostrate to apologize to the Okyenhene and the Akyem Abuakwa Traditional Council for his conduct.

However, his show of remorse did not exonerate him entirely.

However, the embattled Benkumhene of Asamang -Tamfoe is challenging the alleged destoolment stating that the trial was unfairly done.

“If the Okyenhene has concluded that I am an illegal miner, then I urge him to report me to the relevant national and appropriate institutions for redress. I have never been into mining and will never go into mining despite its lucrative nature for no reason whatsoever because in 2018 I was adjudged the best district cocoa farmer in Atiwa West. I can therefore not renege on this honour by encouraging the destruction of Cocoa farms”

He added that “finally, I declare and state without any equivocation that, I did not prostrate as a sign of remorsefulness or guilt but as a sign of rendering an unreserved reverence because considering the venue of the gathering, any form of resistance and insistence of not being guilty would not have resulted in any peaceful reactions.

“I am still the de-facto Benkumhene of Asamang Tamfoe and still stand by the contents of the press conference the Okyehene referenced instead of his agenda for the day which he prosecuted”.