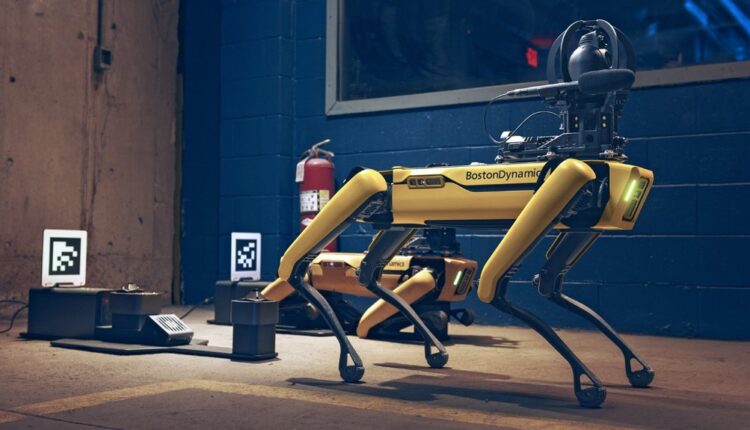 He adds that Spot also has a particular application to work on no-go or low-manoeuvre areas as it is able to traverse difficult terrain at both its normal height and in a crouching mode. Spot is also easily able to recover from falling over, in addition to constantly maintaining good balance from knocks.

Spot has been designed to conduct autonomous operations, such as routine “autowalks” of aboveground plant and operations, as well as underground.

However, Spot can also be controlled remotely by an operator, who has 360o visibility as a result of forward-facing, side and rear cameras, enhanced in low-light environment by infrared capability off the shelf.

Dwyka demonstrated two versions of Spot to South African mining companies, including Spot Explorer and Spot Enterprise, the latter being more adaptable to autonomous operation as it can dock itself to a charging and data offloading station that also offers a quick charge function.

Wheeled and tracked robots are limited by stairs, gaps and ground-level obstructions such as cabling and staged materials and minor height differences in flooring.

Alternatively, aeriel drones work well for exterior site and facade monitoring but struggle when it comes to constrained environments, battery life, payload and path repeatability, according to Boston Dynamics.

In this regard, Spot’s animal-like mobility enables it to navigate these environments easily without the same constraints faced by drones or wheeled/tracked robots. Spot can also easily traverse stairs.

Spot can carry various payloads of up to 14 kg, including a high-resolution and zoomable camera; light detection and ranging sensors; thermal imaging; auditory sensors to identify audible leaks such as that of compressed air; and food, water and medical supplies for search and rescue operations.

In search and rescue operations, Spot can also be configured to carry lights, a microphone and speaker to facilitate two-way communications to trapped persons.

A dedicated Spot Arm version is also available. This Spot comes fitted with a manoeuvrable arm, which cannot be removed, that can interact and collect items, and open doors.

Spot can be controlled using a remote controller based off of Xbox gaming consoles, thereby enabling anyone who has used an Xbox to more easily adapt to using Spot robots.

Spot has also been used to explore projects for creative industries, such as dancing on stage and performing in theme parks.