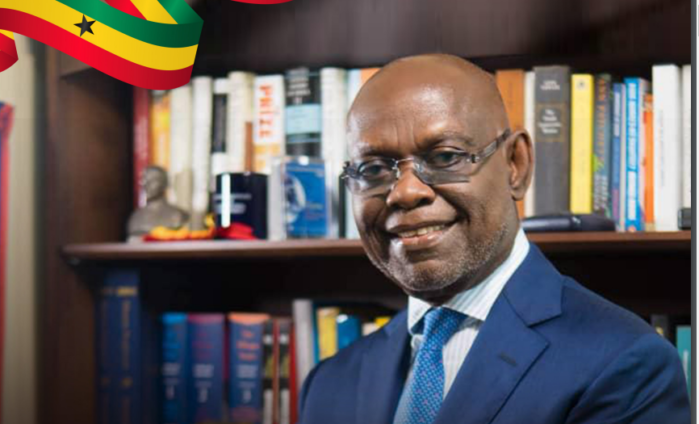 I first met Dr Kwesi Botchwey in 1988 when I was working at S.G. Warburg & Co., then the UK’s largest merchant bank, with a long history as an advisor to several governments in Africa, Asia, Europe and Latin America on debt restructuring and debt refinancing arrangements, many of which involved negotiations with bilateral and commercial creditors and the International Monetary Fund. This formed the context for our meeting.

Last month, on a brief trip to Accra, I arranged to meet him at his home, where we spent several enlightening hours discussing his work as a minister and his chairmanship of the body which evaluated the performance of the IMF. We also discussed my work as a banker and my current research in economic history. Our conversation ended by drawing lessons from history that gave insights into Ghana’s current economic and financial predicament.

Dr Botchwey attended the Presbyterian Boys’ Senior High School, the University of Ghana, Yale Law School, and the University of Michigan Law School. He taught at universities in Zambia, Tanzania and Ghana. At the Fletcher School of Law and Diplomacy, Tufts University, he held a professorship.

Academic economists and economic historians tend to separate Ghana’s post-colonial economic history from 1957-1983 from its development after this watershed. In 1983, the government, under Flight Lieutenant Jerry Rawlings, replaced attempts to apply strict distributionist principles in a command economy with a programme of economic liberalisation, creating macroeconomic stability, market-led growth and economic recovery.  Economic historians argue that critical policy failure necessarily preceded policy reform. In 1983, inflation rose to 123 per cent, its highest so far.

Ghana’s economic crisis intensified when Nigeria’s President Shagari, seeking re-election, ordered the return of up to 1,200,000 economic migrant Ghanaians, amounting to 10 per cent of Ghana’s population. The sudden inflow of over a million Ghanaians into an already stressed economy was an economic and humanitarian disaster.

It was against this backdrop that Dr Botchwey worked alongside Dr Joseph Abbey, who at the time served as the Executive Secretary of the Policy Monitoring and Implementation Committee in the Provisional National Defence Council government, and the late Dr Gobind Nankani, the renowned economist, to put in place the programme that was to turn Ghana’s economic fortunes around. Dr Botchwey recalled, in an article from 2005, that: “To some extent, the almost exclusive focus on monetary and fiscal discipline in the early stages of Ghana’s programme – at the time – was dictated by the prevailing macroeconomic situation. The exchange rate was grossly overvalued, large budget deficits were being financed almost entirely by borrowing from the banking system, and inflation was about 120 per cent”.

Emphasising fiscal discipline, domestic savings, and market freedom to set prices and exchange rates, the Economic Recovery Programme (ERP) and Structural Adjustment Programme (SAP) that were introduced soon succeeded. Within a year, growth hit eight per cent, then the highest increase in the country’s growth rate since the 1960s, which freed Ghana from decades of slow growth. Although I and others drew attention to this improvement, Dr Botchwey reminded us only last March in a university-based lecture that: “Growth in GDP per capita can encourage us to think all is well when it isn’t”.

The new market freedom to set input and producer prices enabled Dr Botchwey, as a minister, to attract enough funding to reverse the deterioration of the country’s ports, roads, and railways in support of the expansion of trade. With his determination to take the tough decisions that almost always accompany economic turnarounds, Dr Botchwey became for Gareth Austin, the Cambridge University Professor of Economic History, “the most transformative, indeed the best, finance minister Ghana has ever had”.

In an interview published in Africa Report in March 1995, Dr Botchwey had expressed confidence that fiscal indiscipline would not prevail ahead of the 1996 election because “we learned our lessons in 1992”, and that he expected “a small surplus in the balance of payments or, at worst, a small deficit”. That month, the country announced its first-ever budget surplus.

Why Dr Botchwey resigned later in 1995 is unclear at best, but it was reported at the time that he was not allowed to prevent a subsequent slippage in fiscal discipline. He later discussed the indiscipline that tends to be associated with government spending, and remembering the tension between the integrity of governments and the financial pressures entailed in the democratic process, he reasoned that it is the contest for power that lies at the core of all democratic systems and that “democratic governments must win elections, and political parties and electoral campaigns must be funded”.

The pressures from these dynamics, he believed, led incumbent governments to break spending limits or manipulate contract award systems for political advantage, creating deficits that eventually replace monetary stability with inflation, currency instability, fragility in the banking sector, and high nominal interest rates. In his academic work, Dr Botchwey’s warning, based on his experience as an African Minister of Finance was that the choices before African policy-makers “cannot be obviated merely by encouraging countries to prepare ‘alternative’ macroeconomic scenarios, when the only real alternative is a baseline scenario that IMF staff certify as feasible based on historical trends in domestic and external (especially donor) resource flows”. Many observers of Ghana’s current economic challenges may judge this perspective vatic.

Perhaps what made Dr Botchwey unique among finance ministers is that he always wanted to engage regularly with academia. On hearing of Dr Botchwey’s passing, Sir Paul Collier, Professor of Economics and Public Policy at the Blavatnik School of Government at the University of Oxford, said, “Kwesi Botchwey pioneered the economic recovery of Ghana. By his example of applying his skill as an economist, and his integrity as a person to public policy at the highest levels of government, he became the model around the continent.” Dr Botchwey had worked closely with Professor Collier in carrying out the external evaluation of the IMF’s Enhanced Structural Adjustment Facility, known as ESAF.

Characteristically, very soon after our meeting, Dr Botchwey attended a lecture on November 3, at the Harvard Kennedy School, at the invitation of Professor Emmanuel Akyeampong, who had met him in 1995. Professor Akyeampong had joined Harvard Faculty in 1993 and in 1995, Dr Botchwey had been recruited by Jeffrey Sachs to join Harvard’s Institute for International Development. They became close friends, with Dr Botchwey’s useful input into Professor Akyeampong’s forthcoming book.

The lecture that Dr Botchwey attended at Harvard was given by Dr Hippolyte Fofack, Chief Economist of the African Export-Import Bank, and was on the impact that the African Continental Free Trade Area agreement was expected to have on Africa’s integration into the global economy. Kwesi was described by those present as being so energised by the lecture that he offered to give a talk as part of Harvard’s Africa Lecture Series. Sadly, this and other known academic engagements will not take place. Sadder still is the fact that the memoirs on which he was working will not be completed at his hands.

The sudden news of Dr Botchwey’s passing came as a shock and a great loss not only to his family and close friends, but also to the country as a whole, particularly as it occurs at a time when Ghana could have benefitted from the guidance of someone steeped in experience, and who had helped us navigate policy choices in the past; for, as he reminded us earlier this year, the policy choices made by any government which needs to turn around an ailing economy will determine “how one distributes hardship in an equitable and transparent manner”. His passing also comes as a personal loss for, selfishly, I was looking forward to our next meeting planned for January next year. He will be missed. May he rest in peace!

The author is a former Vice Chairman at Standard Chartered and is currently at the Centre for Financial History, University of Cambridge. He sits on the Board of Trustees of the United Kingdom’s Royal Economic Society.