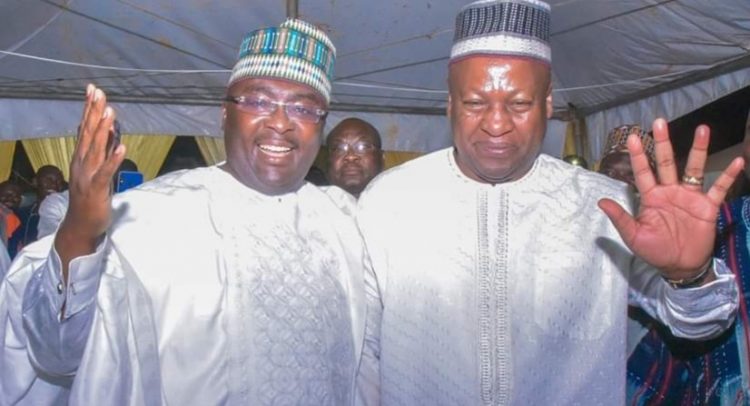 Former President John Dramani Mahama and Vice President Dr Mahamudu Bawumia have encouraged Ghanaians to sacrifice and give back to humanity as the country marks Eid ul-Adha.

The two leaders posted well-wishing messages on their Facebook walls on Tuesday, July 20, as the country marked the occasion.

Urging Ghanaians on to contribute their quota in making the lives of others and the country a better place for all, the former president said that the celebration of the Eid “reminds us of the value of obedience, sacrifice and Allah’s divine mercy.”

He added: “As we safely celebrate with family and loved ones, may our prayers be answered, and our sacrifices be acceptable to Allah. May we be inspired by the sacrifice to give back to humanity, something bigger than ourselves.” 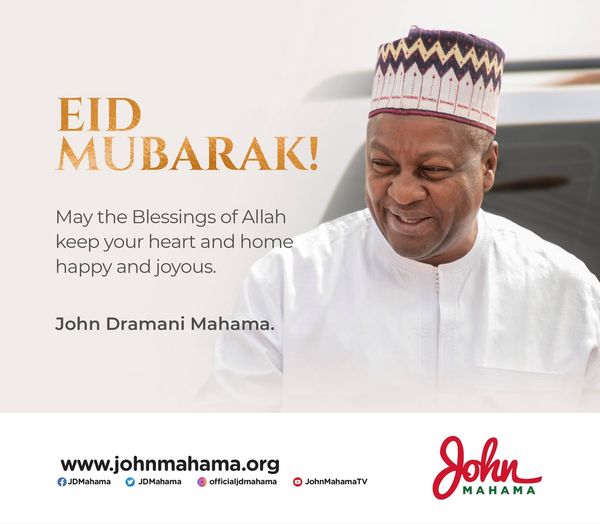 On his part, Dr Bawumia called on the public to be inspired by the significance of the festival and “be selfless to humanity and our nation, as well as be obedient to the Almighty Allah as demonstrated by Prophet Ibrahim”.

“May the Almighty Allah accept our prayers and also bless our homeland Ghana.”

What is Eid ul-Adha?

Although Eid ul-Adha has no direct relation to the Hajj Pilgrimage, it is but a day after the completion of Hajj and therefore has significance in time.

The day of Eid ul-Adha falls on the tenth day in the final (twelfth) month of the Islamic Lunar Calendar; Dhu-al-Hijjah.

The day that celebrations fall on is dependent on a legitimate sighting of the moon, following the completion of the annual Holy Pilgrimage of Hajj –  which is an obligation for all Muslim’s who fit specific criteria, one of the important Five Pillars of Islam.

The celebration of Eid ul-Adha is to commemorate Prophet Ibrahim’s devotion to Allah and his readiness to sacrifice his son, Ismail.

At the very point of sacrifice, Allah replaced Ismail with a ram, which was to be slaughtered in place of his son.

This command from Allah was a test of Prophet Ibrahim’s willingness and commitment to obey his Lord’s command, without question.

Depending on the country, the celebrations of Eid ul-Adha can last anywhere between two and four days.

The act of Qurbani (sacrifice) is carried out following the Eid Salaah (Eid Prayers), which are performed in congregation at the nearest Mosque on the morning of Eid.

The act of Qurbani consists of slaughtering an animal as a sacrifice to mark this occasion in remembrance of Prophet Ibrahim’s sacrifice for Allah.

This is also known as Udhiya. The days of animal sacrifice total three days, from the 10th to the 12th of Dhu-al-Hijjah.

The sacrificial animal must be a sheep, lamb, goat, cow, bull or a camel; the sheep, lamb or goat consist of one Qurbani share, whereas a bull, cow or camel consist of seven shares per animal.

The animal must be in good health and over a certain age in order to be slaughtered, in a ‘halal’ friendly, Islamic way.

The Qurbani meat can then be divided into three equal portions per share; one-third is for you and your family, one-third is for friends, and the final third is to be donated to those in need.

Traditionally, the day is spent celebrating with family, friends and loved ones, often wearing new or best attire and giving of gifts.