Electricity from wind and solar cheaper than nuclear – IES

Institute for Energy Security’s (IES’) review of data from the U.S. Energy Information Administration (EIA) and financial advisory and asset management firm Lazard, have revealed that generating electricity from wind and solar is more economical than nuclear.

The potential savings attained by generating a set quantity of electricity from renewables as a substitute for nuclear power is revealed as close to 288 per cent for wind and utility-scale solar photovoltaic (PV).

IES’ trend analysis based on Lazard’s Levelized Cost of Energy (LCOE) between 2010 and 2019 reveals that new unsubsidized wind and solar power were cheaper than some already running resources like coal, nuclear, and some gas. The cost decline is rendering solar PV and wind increasingly attractive resource relative to conventional generation technologies with similar generation profiles. The modelling shows that solar power on its own can beat Gas Peaker plants on their own, without storage, in almost any market.

The U.S. Energy Information Administration (EIA) defines LCOE as the average revenue per unit of electricity generated that would be required to recover the costs of building and operating a generating plant over its assumed lifetime. It is often cited as a convenient summary measure of the overall competitiveness of different generating technologies. Key inputs to calculating LCOE include capital costs, fuel costs, fixed and variable operations and maintenance (O&M) costs.

Lazard’s LCOE comparison for various generation technologies on a Dollar per megawatt-hour ($/MWh) basis, is sensitive to factors such as U.S. federal tax subsidies, fuel prices and costs of capital. It must be noted that a key consideration for utility-scale generation technologies is the impact of the availability and cost of capital on LCOE values; reflecting essentially the return on, and of, the capital investment required to build them. 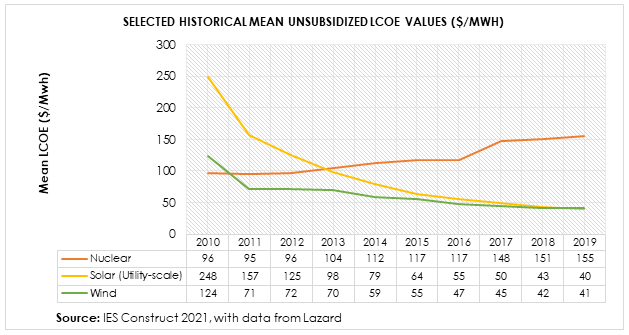 The 2019 report showed that at a high level, both solar and wind power have shown continued price declines, to outpace coal, nuclear, and some gas-fired power plants. The dramatic historical LCOE decline of wind and utility-scale solar PV is in light of material declines in the pricing of system components (turbines, panels, inverters, etc.) and improvements in efficiency, among other factors.

The IES analysis employs selected historical mean unsubsidized LCOE values from Lazard Annual reports. The mean LCOE reflects the average of the high and low LCOE for each respective technology in each respective year.

Lazard’s data suggests an unsubsidized utility-scale solar power plant is going to generate electricity at a cost between 3.6 and 4.4 cents per kilowatt-hour (¢/kWh), with a mean value of 4.0 ¢/kWh. This price has fallen by approximately 84 per cent between 2010 and 2019. Over the period, utility-scale solar power has experienced an average of 25 per cent decline in cost per year. That decline fell to 13 per cent over the last 5 years, and 7 per cent between 2018 and 2019.

With wind, Lazard’s report indicates that it can generate power at a cost between 2.8 and 5.4 cents per Kwh, as it has fallen by roughly 67 per cent between 2010 and 2019. Over the decade, unsubsidized wind power has seen an average of 11 per cent decline in cost per year, a 7 per cent fall per year over the last 5 years.

On the part of nuclear, Lazard’s report suggests it can generate unsubsidized power at a rate between 11.8 and 19.2 cents per kilowatt-hour (¢/kWh), with a mean value of 15.5 ¢/kWh. That between 2010 and 2019, the cost per megawatt-hour of nuclear has risen by 61 per cent. Over the period, the cost of nuclear power has experienced an average increase of 5.7 per cent per year. That increase, rose to 7.12 per cent over the last 5 years, with the largest cost rise recorded as 27 per cent between 2016 and 2017.

From the data analyzed, it is evident that the expected market value of electricity generated by nuclear power is greater than that of renewables, and this difference according to the National Renewable Energy Laboratory (NREL), will continue to increase through to 2050. The body, on the other hand, projects utility solar PV and onshore wind cost to decline 60 per cent and 30 per cent respectively by 2050, from 2018 levels, assuming continued industry growth, and technological breakthroughs could cut costs up to 80 percent by 2050.

Among the three options reviewed, nuclear power is right at the top, with total costs in 2019 of US$155 per megawatt-hour ($/MWh), most of which involves capital construction costs. On the low ends are solar and wind power at US$40 and US$41 per MWh respectively.

The potential savings attained by generating a set quantity of electricity from renewables as a substitute for nuclear power is revealed as close to 288 per cent for wind and utility-scale solar PV. Even without accounting for current subsidies, the cost of renewable energy has shown to be considerably lower than the marginal cost of conventional energy technologies such as coal and nuclear.

The IES analysis also does not take into account potential social and environmental externalities or reliability-related considerations. These include but not limited to air-borne pollutants, nuclear waste disposal, and climate change. It also does not take into consideration issues such as dispatch elements (e.g. baseload/intermediate load/peak), and location (e.g. centralized/distributed).

In The ‘Contempt’ of Dominic Ayine

Homosexuality: Is the church failing Ghanaians?