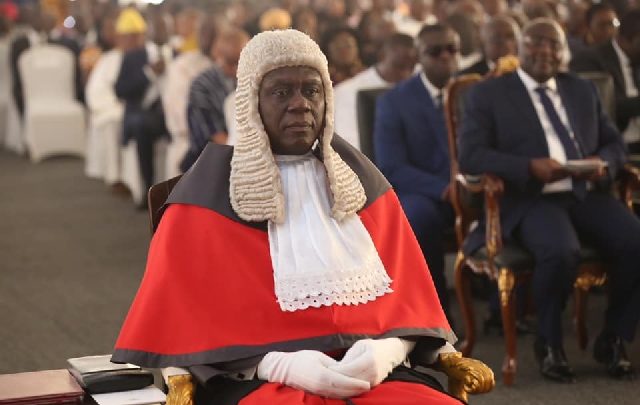 “It must also enact implementing legislation to enable the national courts of Ghana to recognize and enforce the judgement of the Court.”

Justice Yeboah noted that the protocols of the ECOWAS Court of Justice had a provision on referrals by National Courts of Member States and it gave the national courts of member states the responsibility for the enforcement of judgement.

The Chief Justice was speaking at the opening of the ECOWAS Court of Justice 11th External Session held at the Law Court Complex in Accra on Monday for the first time.

He indicated that it was also important for the ECOWAS Court of Justice to review its decision in 2017 to reduce the number of judges of the court from seven to five.

“The court, I believe, requires an adequate number of judges to discharge its functions very effectively. Again, it would be necessary to review the four years non-renewable tenure of the Members of the court, to enable the community to derive maximum benefits from their wealth of experience,” the Chief Justice said.

He commended judges who despite the reduction in numbers from seven to five, had delivered 25 rulings and 114 judgements through dints of hard work since their assumption of duty in August 2018.

Chief Justice Yeboah also commended the Court for receiving the Columbia Global Freedom of Expression prize for the year 2022 conferred on it by Columbia University.

Justice Edward Amoako Asante, President of the ECOWAS Court of Justice, said the external court session was a very useful tool for the awareness creation and it also afforded the Court the opportunity to deepen the relationship between it and the national courts of Member States.

He said during the Accra external session, 60 cases would be heard, and 25 judgements would be delivered.

The session, he said, was going to be a hybrid one and parties, lawyers and agents might choose to participate either physically or remotely.

According to Justice Asante, since the Court commenced the external sessions in 2007, it has successfully carried out programmes in Niger, Bamako, Lome, Guinea Bissau and Abidjan.

Justice Asante emphasized that the ECOWAS Community Court of Justice was not an appellate court over the national courts of member states.

We are only concerned with applications against member states in respect of their treaty obligation to respect, protect and fulfil human right obligations within their territories.

We are therefore not in competition with the national courts of Member states.”

According to him, the ECOWAS Court of Justice mandate was unique because “there is no requirement for exhaustion of local remedies. Although human rights protection is the centerpiece of our judicial caseload, we are mindful of the fact that the Court was set up to facilitate the economic integration process of the Community.”

Justice Asante said however the Court was faced with the challenge regarding enforcement of the judgements of the Court by the national courts.

This he attributed to the fact that “Member States are yet to domesticate the ECOWAS Revised Treaty and the Protocols of the Court.

He said currently, member states complied with their judgements at will and at their own convenience.

“These places the enforcement rate of our judgements at thirty per cent, which is very sad. We are deeply concerned about this situation and will continue to appeal to all member states to do the needful.”