Ending Tuberculosis in Ghana: The men and women hunting down new cases

Tuberculosis (TB) was declared a global emergency in 1993 by the World Health Organization (WHO).

Despite available interventions initiated by the WHO and some countries, the disease remains a key public health concern.

The rates of TB infection and its associated burden is unevenly distributed across the globe with greater severity in lower and middle-income countries including Ghana.

Tuberculosis (TB) still constitutes a serious public health problem in Ghana. This is irrespective of the implementation of the Directly Observed Treatment Short course (DOTS) strategy since 1994; adoption of the World Health Organization (WHO) Stop TB strategy in 2006; and availability of DOTS facilities in most districts in Ghana.

Accessibility of DOTS services is still not sufficient as the majority of the population live at a considerable distance from the DOTS centres and most TB diagnostic and treatment centres are located in urban areas.

Stigma and discrimination, poor knowledge about TB transmission and cultural beliefs that TB is a spiritual disease, are factors that contribute to poor health-seeking behaviour and delay or failure to access early health care services.

According to the Country Coordinating Mechanism of the Global Fund for Ghana, the TB burden in Ghana as at 2013 was 290/100,000 (CCM Ghana) four times above the world average of 71/100,000 for that same year. Innovative interventions to increase case detection were therefore urgently needed to ensure a surge in TB case detection. 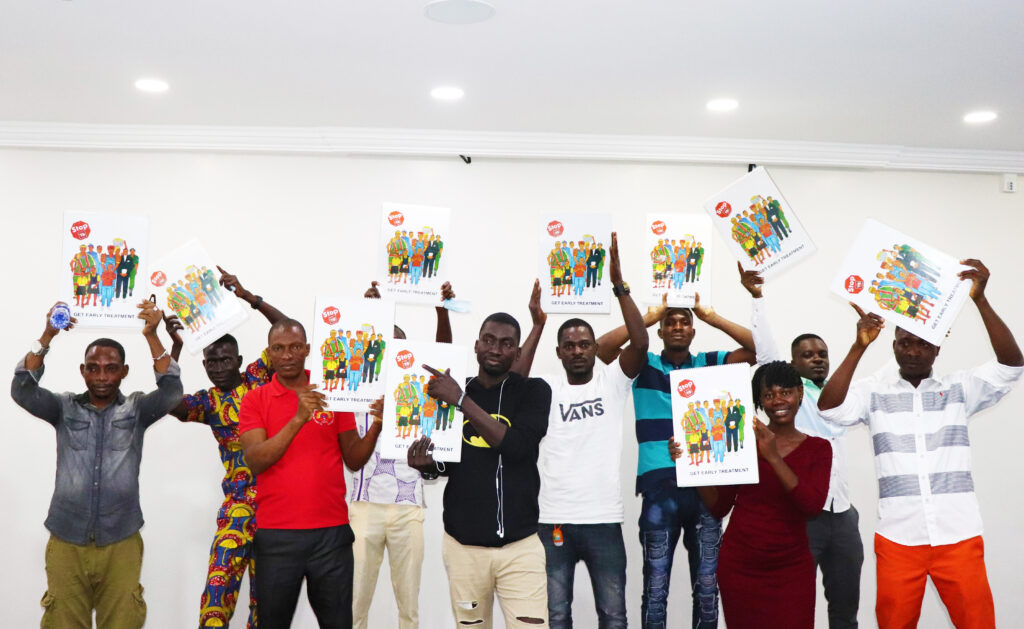 o have been cured of TB and have dedicated their time and resources to serve as advocates in their communities to spread information on TB in order to get persons who might exhibit signs and symptoms of TB to get tested and if positive be enrolled on TB treatment.

They screen and transport sputum to the health facilities for testing. They also refer presumed TB clients to the facility for testing, follow up on defaulting clients in their communities and lead them back to care.

They conduct community sensitization and education on TB, carry out drug pick-up exercises and undertake peer-led referrals for TB clients to the facility for treatment and index testing. Many of them are treatment supporters for newly diagnosed cases. The aim of these activities is to reach out to the hidden TB clients in the communities and ensure that they are provided with the needed care and services.

“TB Champions are a major stakeholder in the fight against Ending TB in Ghana. This is to say they play a critical role in Ending TB in Ghana through active TB case finding at the community level,” says Mr Jerry Amoah Larbi, National Secretary of the Ghana National TB Voice Network.

TB Champions from January 2019 to July 2020, have been able to screen over 17,971 clients out of which 523 people from 6991 presume TB cases tested positive after going through TB testing at the various health facilities. Clients who tested positive were put on treatment.

This feat was achieved by the TB Champions through varied strategies which include but not limited to: planning with district and facility TB focal persons, Coordinators and Project Officers to map out high burden communities for intensive contact tracing exercises, visiting very hard to reach communities such as illegal mining areas popularly known as ‘Galamsey sites, ghettos noted for drugs users, sand winning and quarry sites, hamlets and shanty settlements.

The most significant of these strategies is the transportation of sputum from presumed TB clients to the facility for testing. This has proven to be a very significant addition to the TB case detection process as it has reduced the excuses given for not going for the TB test even when people exhibit symptoms of TB. After testing, TB Champions are provided with feedback on the samples they supply to the health facilities for testing.

If positive, TB Champions follow up to clients’ houses to inform them about the results of the test, mostly in the company of the Coordinators or TB focal persons. The TB Champions at this point counsel the clients and agrees on dates to accompany positive clients to the health facility to begin treatment.

The Champions at the DOTS centres serve as the treatment supporters for newly diagnosed positive TB clients, meaning they are responsible for ensuring that clients adhere to medication given them until they recover.

Ebenezer Odoom, from the Weija-Gbawe Municipality in the Greater Accra Region is a beneficiary of the work of TB Champions.

He was first diagnosed of TB at the Weija-Gbawe Municipal Hospital in Accra after a short illness. Ebenezer was enrolled on treatment immediately. However, four months into his treatment, he was no longer responding to treatment.

After a second examination, it was detected that he was suffering from a type of TB known as the Multidrug-resistant TB (MDR).  The MDR is a type of TB caused by bacteria that are resistant to some of the first-line TB drugs. To cure an MDR TB, he was administered a daily injection in addition to his medication for nine months.

“This was a difficult time in my life. I defaulted the TB treatment but a TB Champion traced me to my house. He kept encouraging me to enroll on the second line TB treatment. The TB Champion told me his story about how he was once in my situation.

I agreed to be enrolled on treatment again. I was finally declared free from TB,” says Ebenezer, who has since his recovery volunteered as a TB Champion under the CSS project to identify positive TB cases and to provide treatment support to TB clients in his community.

“The work of TB Champions has been beneficial to the  Komenda Edina Eguafo Abirem (KEEA) Municipality,” explains Jonathan Kissi, a TB Coordinator.

‘Junior Jesus’ lays down his life for peace

‘We are fighting corruption through digitisation’– Bawumia defends

‘The future is exciting’ – Bawumia makes case for second term

Only 4% voters will vote based on corruption – UG Research

‘Why fight over Free SHS when we know who introduced it?’ – Prof Agyekum