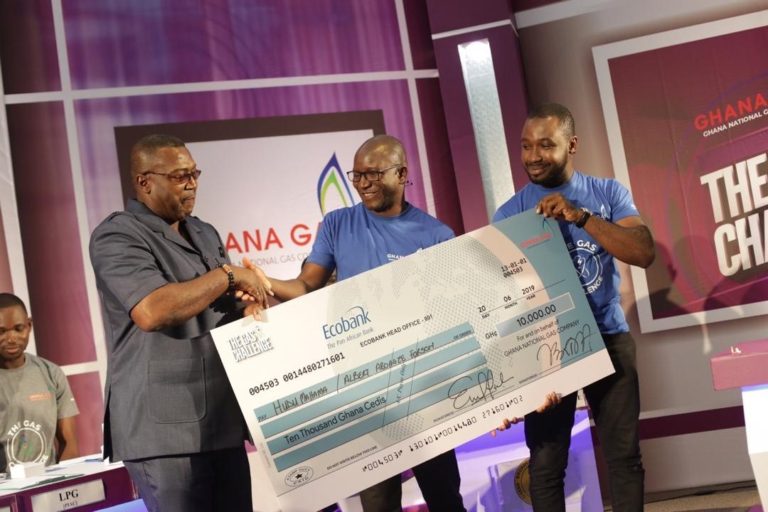 The Ministry of Energy has won the maiden Edition of ‘The Gas Challenge’ organized by the Ghana National Gas Company Ltd at the British Council Auditorium in Accra on 20th June 2019.

The Ministry of Energy topped the Regulators segment of the quiz competition which qualified them for the finals against Ghana Broadcasting Corporation (GBC) and PIAC who had also topped the Media and Civil Society Organization segments respectively.  The Ministry of Energy with the team name LNG won with 64 points beating, the Public Interest and Accountability Committee (PIAC) ‘LPG’ who came first runner up with 48 and GBC (Pentane) who were 2nd runners up.

Dr. Mohammed Amin Adam, Deputy Minister of Energy (Petroleum) who was the Guest of Honor took the opportunity to commend the Ghana National Gas Company (GNGC) on its efforts at reaching out to its stakeholders and general public through this educative and innovative way. He further admonished the media with regard to some technical reporting in the industry and encouraged them to build capacity in meeting the evolving nature of the oil and gas industry.

Dr. Ben K D Asante, CEO of Ghana Gas in his remarks expressed his desire to provide a platform for the transfer of the Gas Industry’s knowledge to the general public.  He further mentioned how since 2017 the Gas Processing Plant has been operations with only Ghanaians at the helm of affairs. He further spoke of some ongoing projects the company is embarking on, notable among them is the Takoradi-Tema Interconnection Project with the objective of allowing reverse flow of natural gas from the West to the East to serve demand centers in Eastern enclave whenever there is excess supply in the Western enclave. He also mentioned the Atuabo-Ivory Coast Gas Pipeline project aimed at extending the Natural Gas Transmission Network System (NGTS) from Atuabo to Ivory Coast to enable the supply of gas to Ivory Coast and other potential off-takers along the pipeline route e.g. the Petroleum Hub enclave in the Jomoro District where a Fertilizer Plant is going to be constructed.

Snr. Manager for Government Relations, Ms. Augustina Asare Osei expresses heartfelt gratitude to Ing. Mrs. Emmanuella Boateng and Dr. Emmanuel Ankuday from KNUST who served as Quiz Mistress and Master respectively.  She further thanked The Graphic Communications Group, GH One, African Centre for Energy Policy, Kumasi Institute of Technology and Energy, and the State Enterprise Commission who displayed good sportsmanship in competition and also to the general public who have shown interest in the buildup to the competition.

Participants representing the Ministry of Energy took away a cash prize of GH 10,000, Laptops as well as a plaque for their institution, the 1st runner Up received GH 5,000, Samsung Tablets and plaque, the 2nd runner up also received an amount of GH 3,000 together with Samsung Tablets and a plaque.