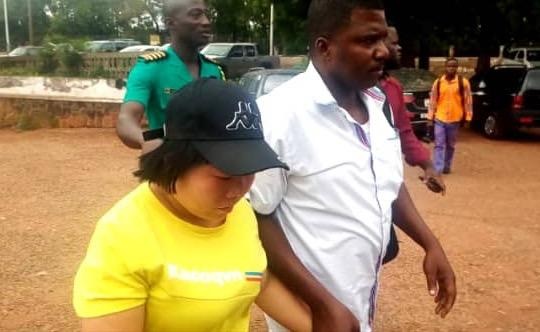 Environmental NGO, A Rocha Ghana, wants the government to explain why illegal rosewood dealer, Helen Huang, was deported instead of being prosecuted.

Deputy Director of the organisation, Daryl Bosu, said it is becoming the norm that when criminal offences, relating to natural resources, are committed by Chinese nationals, the government tends to take the convenient approach to immediately deport them.

“The first instance was the case of Aisha Huang, who was involved in the galamsey [illegal gold mining] and was actually known to be at the top of the syndicate. Then also comes Helen Huang who is also known to be the Rosewood Queen,” he said.

The Ghana Immigration Service (GIS) announced on Tuesday that Huang Yanfeng, aka Helena Huang, who had been standing trial for allegedly transporting a large quantity of Rosewood to Tema for export to China illegally was been deported.

The GIS explained that she was deported for engaging in illicit business while in the country and subsequently revoked her resident permit.

A notice signed by the Comptroller-General of Immigration, Mr Kwame Esuah Takyi, informing Huang of the decision read:” You are hereby informed that your permit to remain in Ghana has been revoked. Therefore, your continuous presence in Ghana is unlawful.”

A statement confirming the deportation, which was released in Accra on Tuesday, and signed by the Head of Public Affairs at the GIS, Mr Michael Amoako-Atta, said the GIS had also informed the relevant institutions, including the Minister of the Interior, the Ministry of Foreign Affairs and Regional Integration as well as missions abroad to refuse her visa to facilitate her entry into the country in future.

Huang was arrested in Tamale in May for transporting trucks of Rosewood lumbers and charged with possessing banned forestry products.

She was, however, declared missing some 48 hours after being granted a police Inquiry bail. She was re-arrested in June.

A Rocha said Ghana it was unfortunate that the government has shelved the opportunity to prosecute in the two natural resource-related crimes and has taken the easy way out.

“This was a clear example for government to make a statement that we might have made a mistake to make Aisha go, this one we are going to get it right,” Mr Bosu said.

In 2013, former Minister for Lands and Natural Resources, Inusah Fuseini, addressed a media briefing to announce the ban on the harvesting and export of the endangered tree species, Rosewood.

The decision was necessitated by the overharvesting of the species in the savannah belt of the country throughout the former Brong Ahafo, Northern, Upper East and Upper West Regions, as well as some parts of the Volta and Eastern Regions.

Rosewood is a hard timber species with durable, distinct looking grain which takes more than one hundred years to mature. They are wild species which are not cultivated; they grow by themselves.