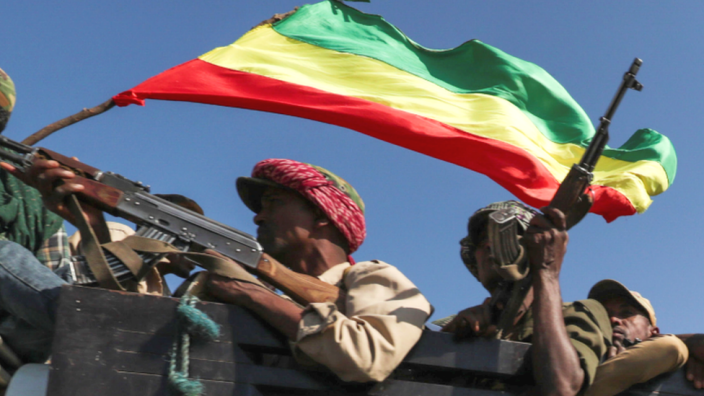 Ethiopia’s state-run broadcaster has said government forces were in control of the town of Chifra in Afar region, their first major seizure since Prime Minister Abiy Ahmed said earlier this week he would head to the front lines to lead federal troops against fighters from the northern Tigray region.

The Tigrayan forces captured Chifra, on the border between the northern Afar and Amhara regions, after fighting intensified last month.

There was no immediate comment by the Tigrayan forces.

Much of northern Ethiopia is under a communications blackout and access for journalists is heavily restricted, making battlefield claims difficult to corroborate. Al Jazeera, however, was able to gain exclusive access to Chifra, the first international news organisation to do so.

Reporting from “the heart” of the town, Al Jazeera Arabic’s correspondent Mohammed Taha Tewekel said the Tigrayan forces “were driven out of this strategic area” by pro-government militia from the Afar region, but also noted “gunfire could be heard from all directions” for hours.

“It [Chifra] has been the epicentre of military operations during the past 40 days,” Tewekel said during a live broadcast, with gunfire ringing in the background.

“The scenes we witnessed are very appalling. Dead bodies everywhere on the streets. It is living proof of the ferociousness of the fighting. There are clear signs of the lack of humanity in this conflict. The town’s commercial shops were totally destroyed, even the mosques were not spared. All the residents have fled for their lives and the town has turned into military barracks for the Afari fighters,” he added.

The Afari fighters “have seized the city” and are now advancing towards the towns of Bati and Kombolcha, the correspondent said.

Chifra is west of the town of Mille, which Tigrayan forces have been trying to capture for weeks because it lies along the highway linking landlocked Ethiopia to Djibouti, the Horn of Africa’s main port.

State-affiliated Fana Broadcasting reported on Friday that Abiy was on the front line with the army fighting the Tigrayan forces in Afar.

“The morale of the army is very exciting,” he said in the remarks broadcast on Friday, promising to capture Chifra “today”.

After months of tension, Abiy in November 2020 sent troops to Tigray to remove the region’s governing party, the Tigray People’s Liberation Front (TPLF) in response to what the government said was an attack on federal army camps. The TPLF, which dominated the federal government for nearly three decades until Abiy took office in 2018, said federal forces and its allies launched a “coordinated attack” against it.

The prime minister promised a swift victory and government forces seized Tigray’s capital, Mekelle, in late November. By June, however, the Tigrayan forces had retaken most of the region and pushed into the neighbouring Amhara and Afar regions.

International alarm about the escalating conflict has deepened, with several foreign countries urging their citizens to leave as mediation attempts by the United Nations and the United States have so far failed to yield any results.