The European Union (EU) has condemned the Democratic Republic of Congo’s decision to expel its ambassador ahead of crucial elections on Sunday.

The order for Bart Ouvry to leave within 48 hours was “completely unjustified”, an EU spokeswoman said.

The run-up to DR Congo’s poll has been marred by violence and chaos.

On Thursday, opposition supporters ransacked an Ebola assessment centre in the eastern city of Beni to protest against the election commission’s decision to postpone the poll there and in two other areas until March.

Clashes also broke out in the opposition strongholds of Goma and Butembo, both in the east of the country.

The election commission said the poll in Beni, Butembo and the western town of Yumbi would be delayed until March because of insecurity and an Ebola outbreak in the east, which has so far claimed more than 300 lives.

With President Joseph Kabila’s successor due to be sworn in next month, it appears the votes of more than a million people could be discounted.

But in an interview with the BBC, Mr Kabila insisted that postponing the vote until after the final result was due to be declared was lawful.

“Don’t worry, the law has catered for such issues,” Mr Kabila said.

He is backing Mr Shadary, his former interior minister, who is facing a strong challenge from ex-oil tycoon Martin Fayulu and Felix Tshisekedi, the son of the late veteran opposition leader Etienne Tshisekedi.

What led to the diplomatic row?

Sanctions were first imposed on Mr Shadary in 2017 for human rights violations, including a crackdown on the opposition.

On 10 December, EU foreign ministers extended a travel ban and asset freeze on Mr Shadary and 13 other people over “the obstruction of the electoral process and the related human rights violations”.

On Thursday, DR Congo’s Foreign Minister Leonard She Okitundu said the government had “patiently” asked the EU to suspend the sanctions until after the elections, but it had refused. 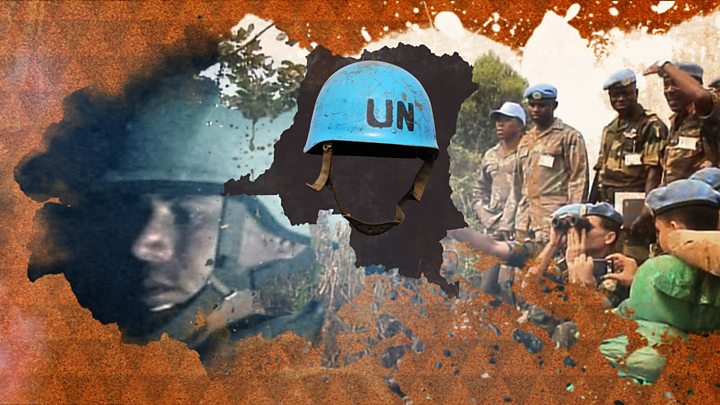 DR Congo had therefore been forced to take reciprocal action, and “punish” the EU for its “reprehensible behaviour”, he added.

In its reaction, the EU said it considered the expulsion of Mr Ouvry, a Belgian national, as regrettable and “completely unjustified”.

“On the eve of very challenging elections in DRC, such a decision can only be considered counterproductive,” a spokeswoman told the BBC.

How do African nations see the crisis?

The South African Development Community (Sadc), a regional bloc which includes DR Congo, has sent a delegation to the country in a bid to ease tensions ahead of the poll.

Zambia’s Foreign Minister Joel Malanji told the BBC the delegation planned to hold a roundtable discussion with all presidential candidates later on Friday.

The delegation’s visit to DR Congo comes after eight African states – Angola, a key alley of Mr Kabila – jointly expressed “strong concern over acts of violence” during the campaign and called for “peaceful, free, democratic and transparent” elections.

Their intervention was seen as crucial as DR Congo has never had an orderly transfer of power since independence from Belgium in 1960, and the opposition fears that the poll will be rigged in favour of Mr Shardary. The commission insists that the election will be credible.

What is the significance of DR Congo?

The vast central African state is rich in mineral resources and is the world’s leading producer of cobalt, used to power mobile phones and electric cars.

However, it has high levels of poverty, bad infrastructure, and a political and business elite accused of enriching itself at the expense of the poor.

The war, which dragged in regional states, claimed up to six million lives, either as a direct result of fighting or because of disease and malnutrition.