Hundreds of farmers will be honoured across the country today but it is the Ashanti Region that has topped the National Farmers Day Hall of Fame since 1985.

The region won its first award in 1988, three years after the scheme started to celebrate the country’s gallant farmers.

From then, seven other farmers from the region received the prestigious award, bringing its tally to eight.

Although the Central Region had to wait until 14 years since the inception of the award to win its first, the region is the second most honoured with five prizes.

The Upper West, Western, Brong Ahafo regions each have three awards to their name. The three are followed by another trio- Greater Accra, Northern and Volta regions winning two each.

The region with the least number of winners is Upper East with one. 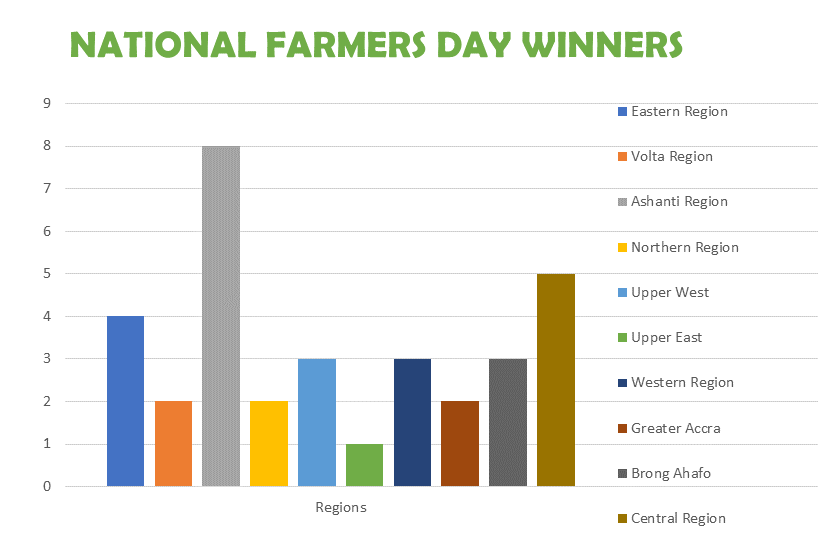 This year’s event is being held in Ho, the Volta regional capital. It is on the theme: “Enhancing Small Scale Agriculture towards Agribusiness Development.”

Farmers’ Day is celebrated on the first Friday of December every year to reward hardworking farmers and fisherfolks.

Farmers Day was instituted in 1985 by the Ghana government after agricultural sector posted a 30 percent growth in 1984.

This was a significant improvement over 1982 and 1983 when the country suffered a severe drought. The first Farmers’ Day was celebrated in Osino, located in the Eastern Region of Ghana, where the drought was most severe.

Unlike today when celebration is of glitz, pomp and ceremony and big prizes, the first award was given to the “best” farmer had two machetes, a pair of Wellington boots and a preset radio as the reward.

Since that time, the prizes have grown more valuable and included bicycles, power tillers, tractors and pick-ups.

From 2002, the winning farmer received a three-bedroom house built at a location of the winner’s choice.