The Kantamanto branch of the GCB Bank, Liberty House, has been gutted by fire.

The building reportedly caught fire at about 10 am on Saturday, November 28, 2020.

The fire started on the first floor of the eight-floor building. It is unclear what might have started the fire outbreak.

Fire fighters have arrived at the scene, making frantic efforts to douse the flames which is on the first floor of the seven storey building.

About eight fire tenders were at the scene to fight the inferno.

The Head of Public Relations of the GNFS, Divisional Officer II Ellis Robinson Okoe, told the media that the fire had been stopped from spreading to other parts of the building.

He said the office space in the building  that caught the fire contained stationeries.

According to him from the preliminary investigations, the fire had been raging for a while before the service was called.

“When we got here, it was a little chaotic because almost all the people here wanted to jump over the wall to fight the fire.

“When we got here, they were shouting but look at the season. It was a big challenge getting here. Because of the yuletide, there were a lot of people in town.

“But we did our best and the fire is now under control,” he said. 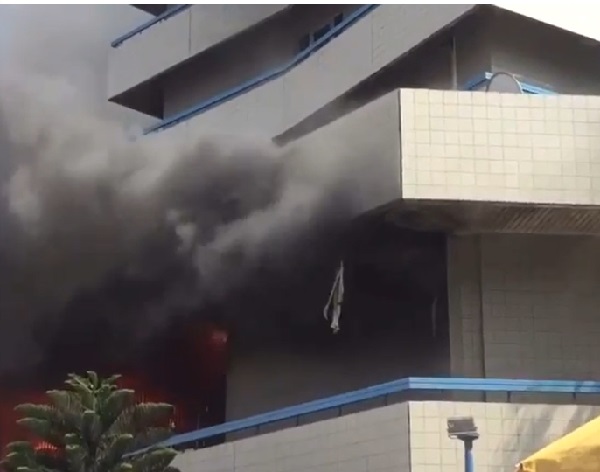 Meanwhile, the situation has caused heavy vehicular traffic in an around the Accra Central business district where thousands of shoppers are also caught in human gridlock.

Personnel from the police Motor Traffic and Transport Directorate (MTTD) have barricaded some roads to ensure vehicles and individuals  do not get close to the scene.

No casualty has so far been recorded.

The GCB since the fire outbreak of COVID-19 in Ghana has stopped Saturday banking. It is therefore not clear if there were staff of the company inside the building.

Offices of GCB Bank, the country’s biggest financial institution in terms of branches, have not been spared fire outbreaks over the years.

On January 7, this year, it took the timely intervention of fire officers to control an inferno at the Bekwai branch of the Ghana Commercial Bank Limited in the Ashanti Region.

The facility was formerly used as an office space by the Social Security and National Insurance Trust (SSNIT).

But for the timely intervention of the Ghana National Fire Service, the entire building of the Ghana Commercial Bank Towers at the Kwame Nkrumah Circle would have been in flames on May 23, 2013.

Tesla inks deal to get key battery component outside China