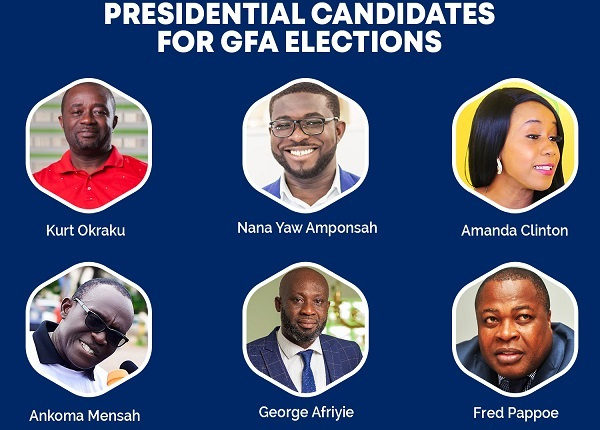 Ghana and the world will witness the first ever Ghana Football Association (GFA) presidential debate for the five aspiring presidential candidates on Monday.

The in-person showdown between Amanda Clinton the only lady contender, Fred Pappoe a former Vice President of GFA, Kurt Edwin Okraku the Executive Chairman of ‘Dreams Fc’ Lawyer George Ankomah Mensah and Nana Yaw Amponsah who is the president of ‘Phar Rangers’ football club takes place at the College of Surgeons and Physicians at Ridge in Accra.

Here’s what you need to know about the rules, format and structure of the GFA presidential debate:

TIME: The debate will begin at 6:30pm and be carried Live on Happy FM 98.9 FM and its affiliate media platforms (e.TV Ghana, Online and Social Media).The Ghana Broadcasting Corporation (GBC) and other major networks in Ghana will also broadcast a Live feed.

DEBATE FORMAT: The debate will be divided into three (3) segments of 15 minutes each. The topics for those segments, selected by the Moderators, are: ‘’Domestic league Management’ ’Refereeing’’ and ‘’Spectator Welfare’’

Programmes Manager of Happy FM, Emmanuel Akrumah explained the mechanics of the debate

‘’The event will begin at exactly 6:30 pm with a pre-recorded welcome address from the Chairman of the Normalisation Committee Dr. Kofi Amoah, a goodwill message from the Sports Writers Association of Ghana (SWAG) and a message from the Deputy Minister of Sports.

Since its football we are making sure the highlight of the event which is the debate will be done within ninety minutes’’ Mr. Akrumah said.