Five suspects including 14-year boy arrested for robbery at Sekyedumase

Five persons, including a juvenile, have been busted for robberies on highways that connect Nkoranza and Techiman in the Bono East Region, and the Ejura Sekyedumase Municipal area in the Ashanti Region.

The four suspects: Ajara Sagu, Rashid Ibrahim, Ibrahim Iddrisu, Musah Arijuma, together with the 14-year-old minor were arrested on 16 November at Ejura, after extensive surveillance of their activities.

The police made this known in a statement on Tuesday, 23 November 2021.

A number of items and some amount of money were retrieved from the suspects.

“On the spot search on the suspects and juvenile led to the recovery of 10 assorted mobile phones, one Infinix charger and a lady’s handbag. Other items suspected to have been robbed from commuters and retrieved from them included one unregistered Apsonic Aloba motorbike and GHC 2,279,” the statement said.

The police further assured residents of the area of their commitment to making the community safe and peaceful.

Fast forward to June 9, 2021, a man was shot in the stomach in a daylight robbery by two armed men at Pig Farm.

On June 11, 2021, an unidentified man in an attempted robbery, attacked the driver of a Nissan Pathfinder with registration number GE-8088-11 on the GIMPA- Fiesta Royale road.

He threw a big stone at the vehicle, smashing its glass door and tried to escape into a nearby bush. But he was arrested by the police after the victim drew the Police’s attention. 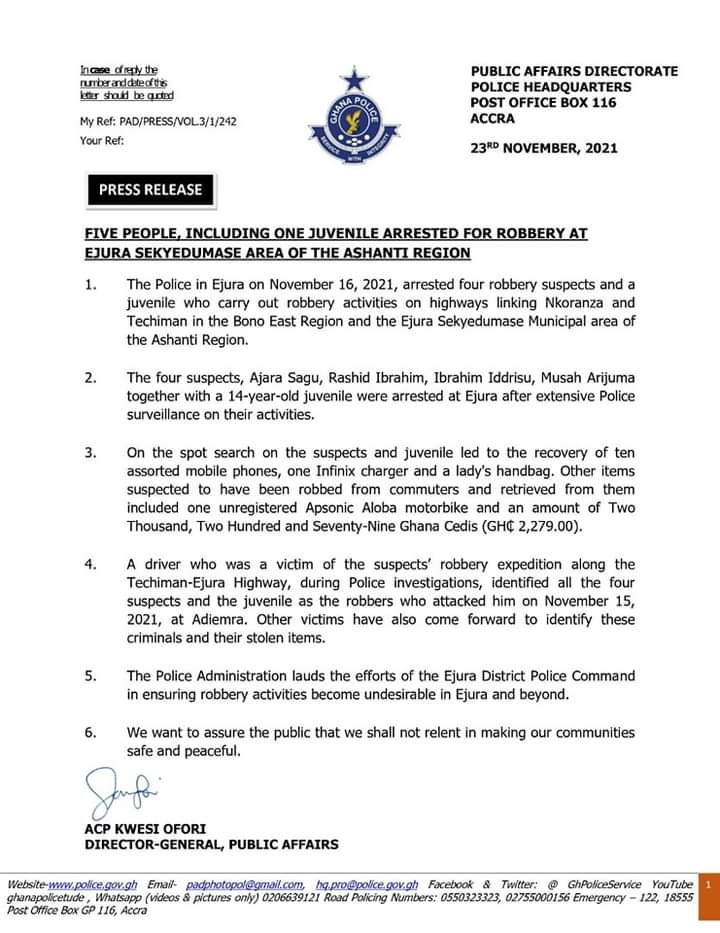