A former Presiding Bishop of the Methodist Church of Ghana, Rev Dr Samuel Asante-Antwi, is dead.

Reports indicate that he passed on Saturday night at the Korle Bu Teaching Hospital in Accra.

He was born in the small Akyem Abuakwa village of Moseaso, on Saturday, 22nd May, 1937.

He was the Chairperson of the Board of Trustees of the National Cathedral, which construction has been frozen because of COVID-19.

Graphic online reported that although he was very sick, he was upbeat and hopeful the National Cathedral would be built.

Rev Asante-Antwi, led the Methodist Church from 1997 to 2003, and also became the Chairman of the New Patriotic Party (NPP) Council of Elders. 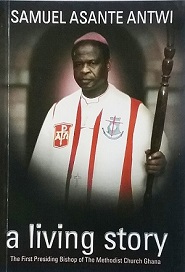 The former Council of State member, under the Kufuor administration, was an avowed Rawlings critic during the Provisional National Defence Council (PNDC) regime from 1981 to 1992.

In the run-up to the 2008 elections, which the NPP lost to the National Democratic Congress, he challenged the security agencies to act expeditiously to confirm the veracity of a ‘hit list’ allegedly compiled by former President J.J. Rawlings if the then opposition party wins the polls.

The list comprising of prominent men and women of all sectors of the economy, including ministers of state, politicians, businessmen and journalists was widely circulated via email and also had the name of Rev Dr Asante -Antwi.

Going down the memory lane, he recalled that back in 1979 and the 1980s, similar things went on before the commission of heinous crimes including the abduction and murder of the three judges and a senior military officer.

Nothing happened after the elections.

In 2008, five years after he hanged his cassock as the leader of the Methodist Church in Ghana, he got tongues wagging when he allegedly used the then-candidate Nana Akufo-Addo’s campaign song as a ringtone.

Not long afterwards, he declared support for the opposition party, the New Patriotic Party, at a time when Ghana’s political landscape had little tolerance for public figures, particularly the clergymen endorsing political candidates for office.

His 2010 declaration got him cheers from NPP supporters and boos from NDC sympathisers.

Speaking at a thanksgiving service for the then-candidate Akufo-Addo, who had won the NPP primaries in 2010 ahead of the 2012 elections, he hailed the party’s candidate as the best man to bring progress to the country.

He chastised President J. E.A Mills for the country’s economic downturn, describing the administration as a failure and disappointment.

The acts of indiscipline by NDC footsoldiers, who were on rampage seizing public toilets, also attracted verbal lashes from the retired clergyman.

The comments tickled some nerves and prompted responses—the government, think tanks and a section of the public—they were swift, and almost all demanded apology.

The argument of his critics were that a minister of the gospel could not hide behind the pulpit to whip up support for a political party.

Rev Fred Degbe, the then General Secretary of the Christian Council of Ghana, waded into the matter and said even though his peer “went too far with his comment,” it was within his right not to apologise.

He said he knew religious leaders and other powerful people who pretended to be neutral but “speak quietly behind the scenes, adding that such hypocrisy must stop”.