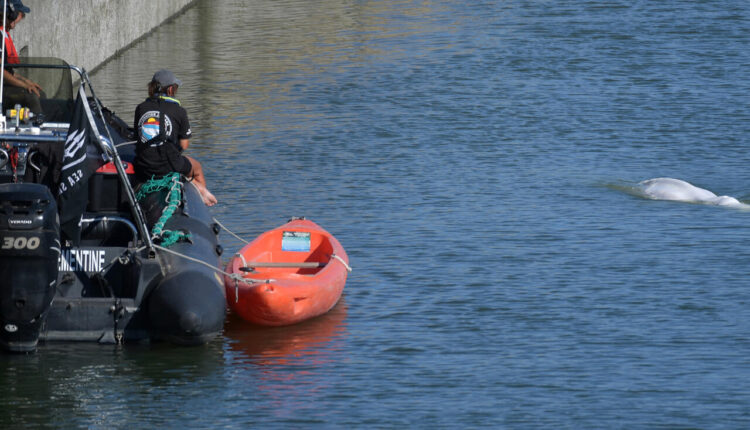 French officials are moving ahead with a delicate plan to transport a beluga whale back to the ocean after it swam far up the Seine river toward Paris, putting its life in danger, a marine expert said Tuesday.

The four-metre (13-foot) cetacean was discovered a week ago and appears sick and underweight but its condition is “satisfactory”,  Isabelle Brasseur of the Marineland sea animal park in southern France, Europe’s biggest, told AFP.

“As of this morning we have an idea of something that could work, we’re going to explain and refine it with the people who are going to help us,” she said.

Belugas are a protected species that cannot survive long in fresh water.

This one is currently around 130 kilometres (80 miles) inland from the English Channel at Saint-Pierre-La-Garenne in Normandy.

“What’s exceptional is that here the banks of the Seine are not accessible for vehicles… everything is going to have to be done by hand,” Brasseur said.

It is stuck behind a lock and unable to move further inland—it’s now some 80 kilometres from the French capital—but is not turning around, and officials warn that attempts to “nudge” the beluga back toward the sea are not viable.

The idea is to take the beluga by road to an undisclosed seawater basin where it can be treated before being released.

But the challenges are considerable and the journey is likely to further stress an animal weighing 800 kilogrammes (nearly 1,800 pounds).

The Sea Shepherd France NGO, which is assisting the operation, said in a statement Tuesday that tranquilisation was not an option, since belugas are so-called “voluntary breathers” that need to be awake to inhale air.

“In any case, we have to get it out of there… and try to figure out what is wrong,” Brasseur said.

Veterinarians will keep constant surveillance during the move.

“There may be internal problems that we can’t see,” she said despite the fact that belugas are “extremely hardy” as a species.

Sea Shepherd has issued an appeal for donations of heavy-duty ropes, nets, mattresses and other equipment.

Belugas are normally found only in cold Arctic waters, and while they migrate south in the autumn to feed as ice forms, they rarely venture so far.

According to France’s Pelagis Observatory, specialised in sea mammals, the nearest beluga population is off the Svalbard archipelago, north of Norway, 3,000 kilometres from the Seine.