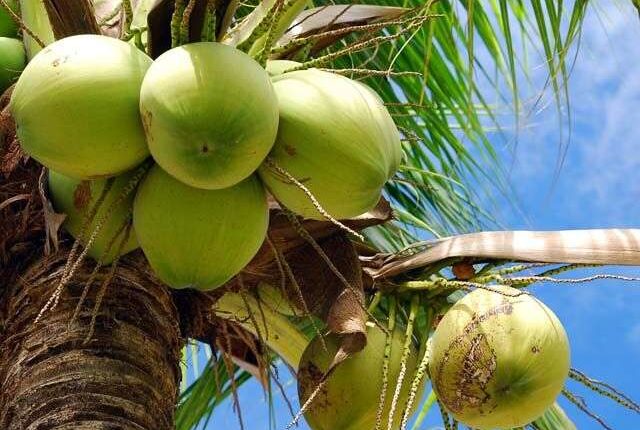 The Ghana Export Promotion Authority (GEPA) has said it is targetting an annual revenue of US$2.8 billion from exporting semi-processed and processed coconut annually, as there is a booming global market for fruit.

Deputy CEO of GEPA, Samuel Dentu – who was addressing dignitaries on behalf of GEPA’s CEO Dr. Afua Asabea Asare at the 2nd edition of the International Coconut Festival in Accra, said the Authority in the last five years has given priority to the coconut industry.

“In 2017, GEPA launched the coconut revitalisation intervention with the clear objective of reviving the then ailing coconut industry to improve the supply capacity of the value chain. Since then, we have seen the revenue potential of the crop rising,” he said.

According to GEPA’s 2021 non-traditional export statistics, coconut raked in US$11.44million while coconut-oil earned Ghana some US$6.99million. These figures represent an increase of 132 percent and 33 percent respectively over the 2020 figures.

“With these potentials, our goal is to work toward achieving an annual revenue of US$2.8billion in the very near future,” Mr. Dentu indicated.

Indeed, Indonesia and other countries in South-East Asia make revenues of more than US$3billion in coconut export yearly. Indonesia alone has almost 17 varieties of coconut for export.

“This tells us that with more strategic aggression in promoting more derivatives of coconut, we can gain a lot more ground”, he said, adding, “GEPA’s collaborative effort with the African Coconut Group, the Trade Ministry, MoFA, Ghana EXIM Bank and the Tree Crops Development Authority has contributed to the growing gains of the sector.”

He said the sector had been identified by government as a major driver of the economy into the next decades based on the economic potential of the crop – including food security, environmental protection and poverty alleviation.

He indicated that growing interest in the health benefits of coconut and its value-added products has resulted in a growing demand for its consumption, alongside its various industrial uses.

“Global emerging trends in the coconut industry point toward value addition, and taking advantage of this countries such as Indonesia, Philippines, India and others have either transformed or are transforming their economies through value addition to coconut,” he added.

The Chairman of African Coconut Group, Davies Narh Korboe, expressed the Group’s continuous collaboration to stimulate trade and investment in the agri-food sector of Ghana in order to improve productivity and value as well as job creation.

It is estimated that about 500,000 people are currently employed in the coconut value chain across the country.

About the International Coconut Festival

Organised by Africa Coconut Group in collaboration with GEPA, the event’s second edition was on the theme ‘Repositioning Ghana’s Coconut Sector for Accelerated Industrialisation’, and called on industry players to help promote and develop the coconut industry while making it a significant and reliable revenue source.

With its maiden event in 2019, the festival’s objective is to bring investors from across the world to export coconut from Ghana.

The event was characterised by exhibitions of high and low-level technologies in the coconut industry, business seminars, financial support platforms, networking, talks and field visits.