The Ghana Football Association (GFA) has begun investigations into the shooting incident at the Baba Yara sports stadium Sunday afternoon.

The incident occurred in an attempt by the police to quell violence which broke out on the pitch after the dismissal of Kotoko defender, Empem Dacosta.

Dacosta’s second yellow card proved costly as the Porcupine Warriors lost by one goal against Berekum Chelsea in the Ghana Premier League played at the Baba Yara Sports Stadium on Sunday.

Aggrieved Kotoko spectators threw missiles onto the field. A few of the supporters gained access to the inner perimeter of the football field and the shots were fired in an attempt to protect the referee and his assistants.

A Kotoko fan was shot in the eye by a police officer who fired the rubber bullet through the rampaging crowd.

Starr FM’s Isaac Bediako reported that the right eye of the victim who is yet to be identified has been permanently damaged.

Meanwhile, the Ashanti regional police command has interdicted the said officer who shot through the crowd during the chaos.

“The officer has been interdicted on the instruction of the Regional Commander, pending investigation,” a press statement released by Public Relations Officer of the Ashanti Regional Police Command, ASP Godwin Ahianyo said.

Reacting to the bloody clashes, the GFA in a statement condemned the incident whiles calling on the police to conduct thorough investigations into the matter.

Below is the FA’s full statement

The Ghana Football Association has learnt with extreme disappointment the unfortunate incidents at the Baba Yara Stadium in Kumasi during the Ghana Premier League match between Asante Kotoko and Berekum Chelsea on Sunday.

We are saddened by reports of injuries to football fans and the hospitalization of a fan, following an alleged gun shooting incident.

Our profound sympathy goes to the injured, and we pray for speedy recovery.

The Ghana Football Association takes a dim view of violence at all league centres across the country and totally condemns what may have precipitated the unfortunate development at the Baba Yara Stadium.

While we conduct our own inquest from our designated matchday officials to find out the exact cause of the unfortunate incidents, we call on the Police Service to also conduct thorough investigation, especially on the alleged shooting incident.

The GFA wishes to assure the general public that it has zero tolerance for violence, and in accordance with our regulations, will deal ruthlessly with any official or club that is found to have breached our GFA Regulations and GFA Disciplinary Code.

Once again, we wish the injured speedy recovery.

The football club caught up in the middle of Sunday’s bloody violence at the Baba Yara sports stadium in Kumasi, Kotoko has criticized the police’s handling of the incident.

A statement issued by the club also condemned the actions of its supporters which led to the chaos which marred their match against Berekum Chelsea.

Below is the statement issued by Kotoko 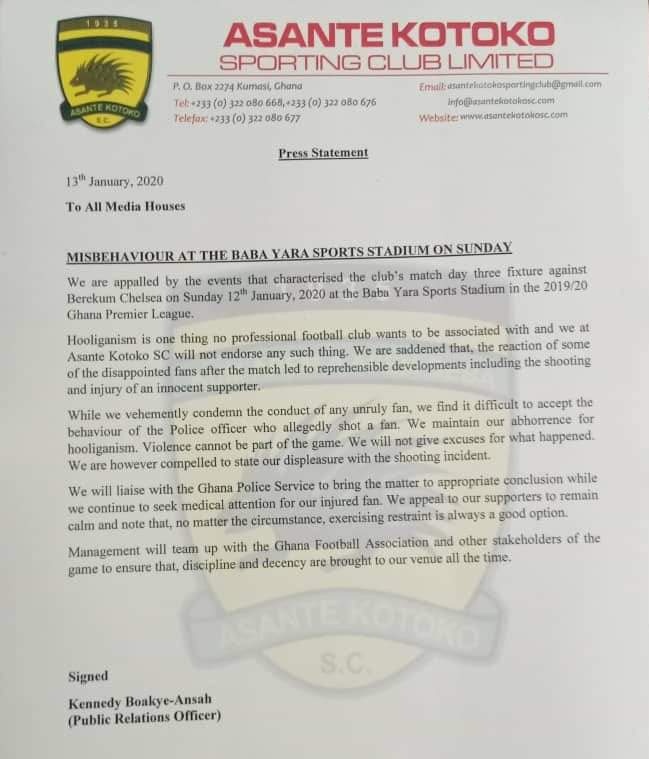