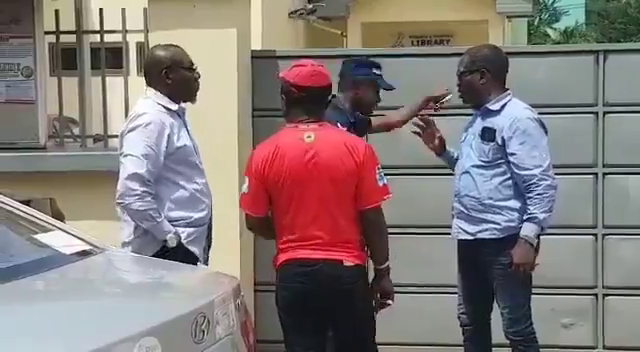 GFA lock up offices as court chases them with injunction

There were dramatic scenes at the Ghana Football Association headquarters Wednesday afternoon after a court bailiff besieged the premises with a court injunction in hand.

The bailiff carried an injunction secured by the President of Africa XI, Moses Dahama, who wants to halt the GFA elections slated for Thursday and Friday because of the disqualification of presidential aspirant Wilfred Osei Kwaku Palmer.

GFA officials appeared to have gotten wind of the impending visit by the bailiff and locked up the main gate of the premises before the bailiff, in the company of a police officer, arrived.

After hours of waiting and knocking at the gate with no success, the two were joined by three other people, one of them identified as former Western Regional FA Chairman, Kojo Yankah.

The GFA employees were allegedly ordered by the Normalisation Committee president, Dr. Kofi Amoah, not to open their doors to any visitor, with the staff busily working inside the building.

The FA apparently got hint and locked up their premises. #CitiSports pic.twitter.com/kqCtpoOvUK

President of Tema Youth, Osei Kwaku, was disqualified from contesting in the GFA elections by the Vetting Committee of the GFA.

He appealed the decision but that was also thrown out.

Palmer has since taken the matter to the Court of Arbitration for Sport seeking redress.

Concurrently, Dahama also headed to a Tema Court to pray to the court to stop the election because Palmer’s disqualification was unfair.

As part of the reliefs Dahama is seeking, he wants Palmer reinstated in the contest and asked the court to stop the elections until such a time when Palmer is made to contest.

Thee elections are set to come off on Friday October 25 in Accra.