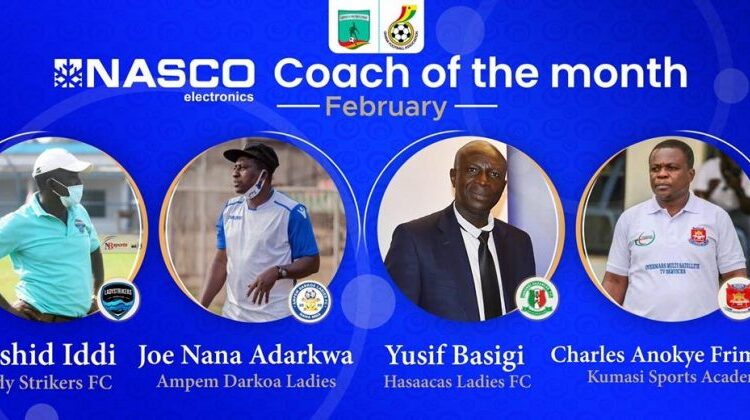 Four coaches and players who excelled in the Women’s Premier League in the month of February have been nominated for the NASCO Coach of the Month Award.

After a review of performances for at least three games, the following were shortlisted:

He led his side to win two crucial away matches, one at the dreaded Sunyani Coronation park against Prisons Ladies in the ‘Bono derby’ and Fabulous Ladies in Kumasi.

They also won at home against Supreme Ladies.

Coach Anokye guided KUSA to two back-to-back wins in the month of February.

First was an away win against Supreme Ladies in a 3-2 victory and a home win against Fabulous Ladies.

Rashid Iddi won the ‘Oguaa’ derby after a win over Sea Lions before recording another win at home against Soccer Intellectuals.

His side is the only team who managed to pick a point against then Leaders, Berry Ladies in February.

They finished the month in 3rd place one a point adrift 2nd place Hasaacas Ladies.

Out of three games played in the month of February, Yusif Basigi led his side to two wins and one draw.

The first was a 1-0 away victory against Soccer Intellectuals.

The team then traveled to Accra to beat Police Ladies at the McDan La Town Park before sharing the spoils at home with Sea Lions. 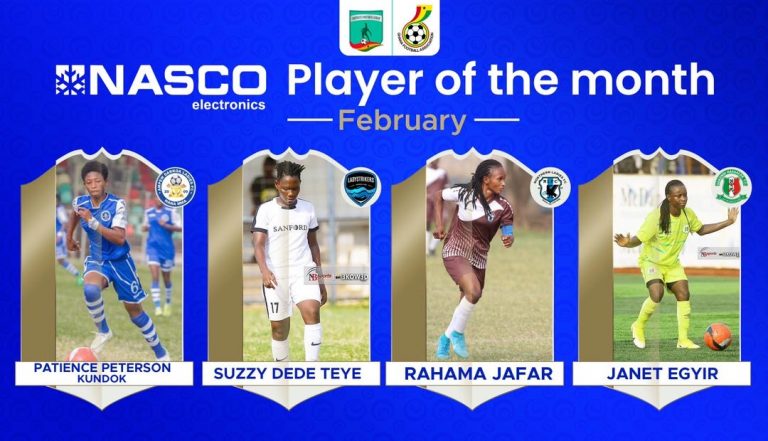 Also on the field of play, a remarkable display by the following ladies in the league have them in contention for Nasco player of the month for February.

Rahama Jafar has been on top form for Northern Ladies in the month of February, featuring in all three games. She scored two goals in two matches and won the NASCO player of the match award once.

Patience Peterson Kundok has been solid in midfield for Ampem Darkoa Ladies. She featured in all three matches, netted two goals, and made one assist in the month of February. She also won the NASCO Player of the match award once.

Suzzy Dede Teye scored four goals and made one assist in the month of February.  She featured in all three games for her side and contributed to lifting Lady Strikers to 3rd place on the Southern zone league log.

As a defender, Janet Egyir kept three clean sheets for Hasaacas Ladies in all three matches and contributed immensely to her side surge in form. She also won the NASCO player of the match when Hasaacas Ladies played with Police Ladies.