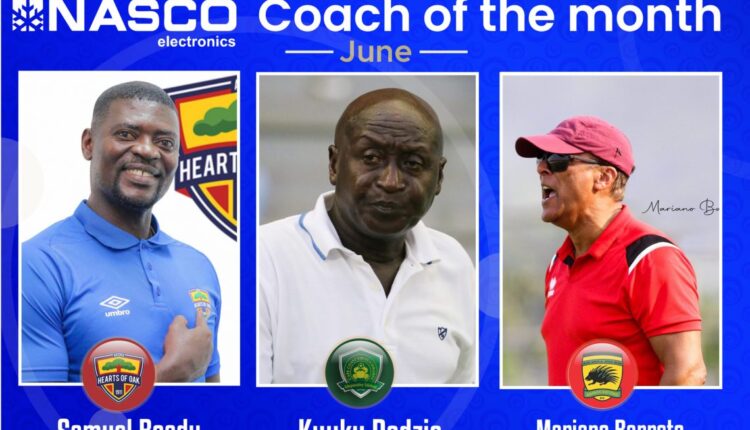 Four top players and three coaches who excelled in the Ghana Premier League in June have been nominated for the NASCO Player and Coach of the Month Awards.

Player of the Month

The four players are in contention for the June award after excelling for their respective clubs in the final stages of the 2020/21 League season that ended over the weekend.

Midfielder Emmanuel Anaful couldn’t find the back of the net but his stellar display in June won him two Man of the Match awards.

He scored twice in the month of June and helped Sharks to avoid relegation from the Premier League.

His performance earned him one MVP award.

After a review of performances for June, Samuel Boadu of Accra Hearts of Oak, Ebusua Dwarfs coach Kuuku Dadzie, and Mariano Barreto of Asante Kotoko were shortlisted for the award.

The three coaches led their respective sides to secure impressive results in the final month of the league season.

The winners will be announced on Friday, 23 July, and will each take home a 41’ inch NASCO Television set and a plaque.

Ghana Premier LeaguePlayer of the Month