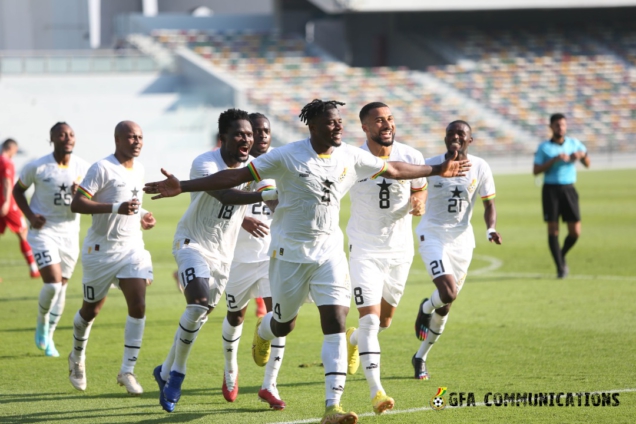 (They Beat Switzerland 2-0 in Trials)

The Black Stars of Ghana pulled a surprise with a precious 2-0 victory over Switzerland in their final warm-up to the World Cup in Qatar.

The match played in neighboring city of Abu Dhabi was initially cagey but increasingly the Ghanaians showed much hunger for results, probably to buoy their fans.

The new reality does not synchronize with the pundits, and certainly this score might prompt head-scratching in expectation of the most unpredictable in football happening in the Gulf days to come.

Two magical acts in the second half were all that Ghana needed to stir current football rankings and cause the reboot in the order of merit.

The lowest ranked team billed to appear at the Qatar football mundial putting to the sword, a side that is respected for its tenacity and advancements lately in the game.

Ghana was a feared side on the basis of the niche it carved at the highest level of football. It had been a doubt lately following a string of uninspiring results and the unsettled nature of the new generation of players in the team.

It must be admitted that the swiss were very cautious and looked either content or intent on catching Ghana on the break. Their tactics however did not take anything away from Ghana which looked the more boisterous to prove a point.
Daniel Afriyie Barnieh was unlucky not to have earned a penalty as he came down in the swiss box in an action that Ghana had a legitimate claim to infringement. The exciting first half mirrored few errors but more constructive play by both sides.

The second was same rhythm until a greater effort in the Swiss half began to recalibrate things. A well-directed corner kick sent the swiss goalmouth boiling In the 69th minute.

Defender Mohammed Salisu who had augmented the attack provided a header that dropped behind the defensive shield of the Swiss into the goalpost.

The game looked more balanced but it was Ghana which roared once again, striker Antoine Semenyo took a nondrop from a cross for the second goal.

The kernel of this dress rehearsal was possibly the convincing manner in which Ghana exploited goal-scoring opportunities. They were quicksilver reactions and acts of marksmanship.

Switzerland had its playmaker Shaqiri a bit lethargic on the day but he was caught in the thick of affairs upfront in his side’s late rally to find the net.