A Chinese man in Ghana has regained his health after contracting the deadly coronavirus.

He was one of the few people who flew into the country early March during the initial stages of the outbreak in Ghana.

He was quarantined after showing mild symptoms which matched the case definition of the Ghana Health Service. Further tests proved positive for COVID-19.

After a few days of treatment at the Atonsu Agogo Hospital in the Ashanti Region, he showed remarkable improvement and tested negative.

He was seen walking out of the facility on Wednesday but has been requested to stay in self-isolation for another 28 days, to be monitored by health officials.

He explained that the person could be described as being “well as you see him” but based on the protocols outlined by the Ghana Health Service, he can only be certified as cured if further tests are negative after a double period of the incubation duration.

Currently, there are no signs or symptoms being exhibited by the patient.

He indicated, “He is not sick now, but we will still wait”.

According to the regional director, the patient, while indisposed, refused to report to the hospital after he arrived in Ghana, March 9.

It took some security personnel to convey him to the hospital where he is now set to become Ghana’s first case of recovery.

The government is expected to provide further details soon.

Ghana has recorded 68 cases of COVID-19 with three deaths within two weeks after the infection was first detected on March 12, 2020.

Two Ghanaian women and a Lebanese man have succumbed to the infection. They all reportedly had other underlying health conditions that experts say increases the likelihood of death.

As of 25 March, some 1,030 people were under mandatory quarantine. Samples from 863 of them have been tested and 38 confirmed positive.

The mandatory quarantine has become a contributing factor to the huge jump in cases.

Meanwhile, the Ghana Medical Association (GMA) has called for a total lockdown of the Greater Accra Region, which has recorded the highest number of cases.

The Ministry of Health identified Accra, Tema and Kumasi as the main areas of the viral infections.

Even though the government has imposed a public ban on mass gatherings and closed the borders of the country, the GMA said in a press release on Wednesday that the best option to contain the virus was a total ban on movement except for essential service providers.

“The lockdown though not a comfortable decision for leadership and citizens alike is a proven option backed by science and along with the other measures will ultimately be in our best interest.

“We call on all Ghanaians to support such a move in the national interest to save our nation from the devastating effects of this pandemic,” the statement said. 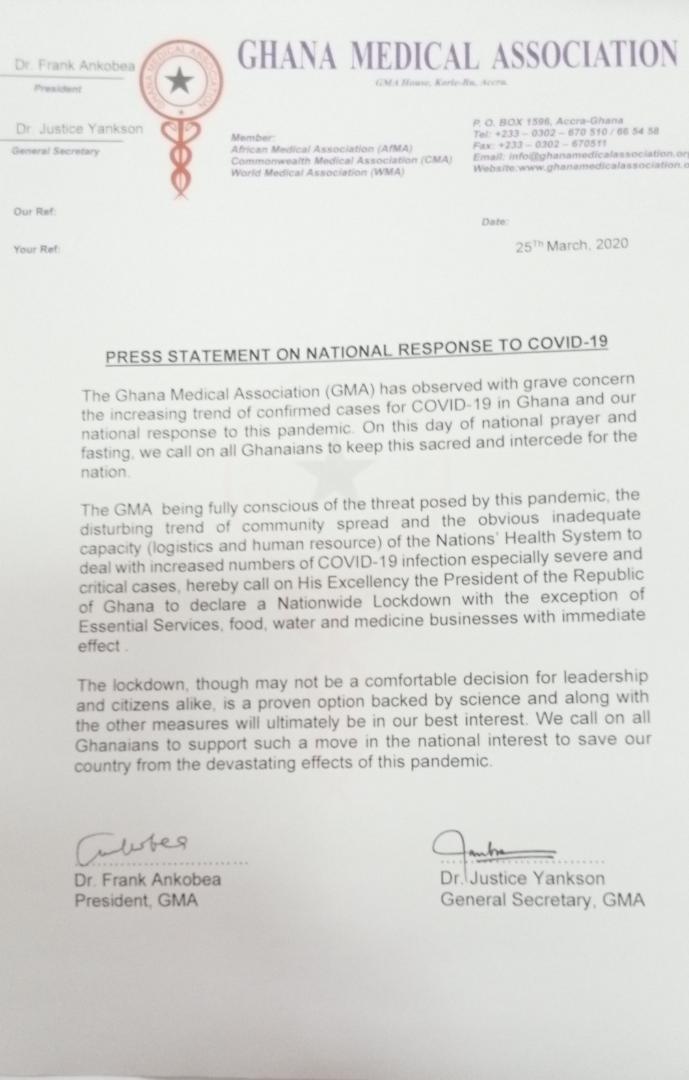