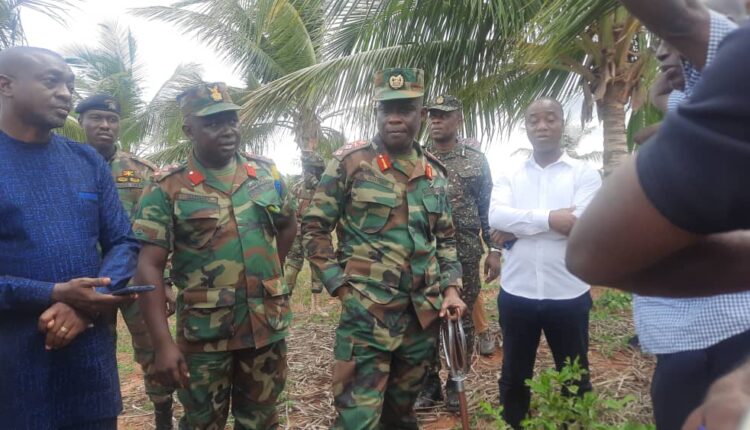 Major General Emmanuel Kotia, National Coordinator, Ghana Boundary Commission has said a joint technical committee from both Ghana and Togo would construct a maximum of 50 pillars to reaffirm the Ghana-Togo Border.

He said the eight-member committee – four from each country – would spearhead the construction of four types of pillars namely: single pillars, main pillars, intermediary pillars and border crossing pillars from May 12-28, this year.

Major General Kotia, who disclosed this at a programme at Aflao to sensitise border community residents on the planned re-affirmation of the Ghana-Togo Border said the exercise was not to re-demarcate the national boundaries but to reaffirm the existing boundary lines.

He underscored the need to erect the pillars to re-establish the boundaries between the two countries saying, “what defines us as a country is our boundary lines.”

The National Coordinator said the exercise had become important as the pillars erected around 1929 and again around 1975 had either been corroded or removed through human activities and assured that the new pillars to be constructed would be such that they would be visible and difficult for people to remove.

He called on chiefs and other opinion leaders in communities along the Aflao and Akanu borders to continue with the sensitisation of their people about the exercise, which would include activities like flying military helicopters and drones, construction, and research works.

Major General Kotia said the Commission required the chiefs, the Assembly, and the Member of Parliament to be “agents of sensitisation in your communities” to ensure the successful completion of the first phase of the process – the construction of 50 pillars spanning about 50- kilometres along the Ghana-Togo Border from Aflao to Akanu.

Monday’s programme which drew security agents, chiefs, Ministers and Ambassadors from Ghana and Togo and which formed part of the programme of activities for the launching of the reaffirmation of the Ghana-Togo Border, is an African Union Border Project with funding support from the German government.

A similar version of the programme would be expected to be extended to Akanu to continue with the sensitisation of the border residents there.

Dr Douti Lardja, Permanent Secretary, Land Commission of Togo was happy about the exercise saying, issues of boundaries were of great concern not just to Ghana but also to Togo because it was about the sovereignty of a country.

Mr Maxwell Koffie Lugudor, Municipal Chief Executive for Ketu South said it was such a respite that something was going to be done about the porousness of the border as the ‘porous nature of the Aflao Border had national security implications.’

Dr Archibald Yao Letsa, Volta Regional Minister in his remarks said the re-affirmation would not only help avert land disputes between the two countries in future but it would also safeguard the peace and security between the two and as well, help them to address the trans-national organised crimes engulfing the sub-region.