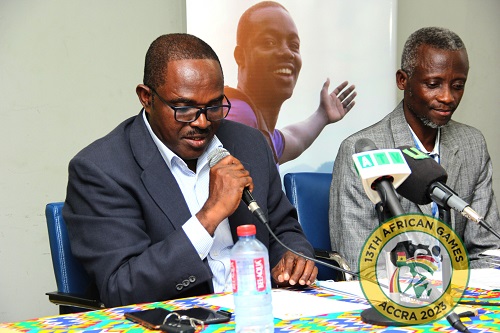 The Executive Chairman of the Local Organising Committee (LOC) for the 2023 African Games, Dr Kwaku Ofosu-Asare, has reiterated his outfit’s readiness to make the upcoming continental showpiece a memorable experience for the athletes and the worldwide audience.

Ghana’s capital, Accra, will host over 5,000 elite athletes, 3,000 technical officers, journalists and global celebrities for the multi-sport competition from August 4 to August 16, 2023.

The African Games (Accra 2023) will have an estimated TV and online audience of over 5.5 billion, making it perhaps the biggest in the competition’s history.

Speaking on Wednesday from Birmingham where the LOC officially launched the one-year countdown to the 2023 African Games, as part of its Commonwealth Games Observer Overview Programme, Dr Ofosu-Asare highlighted the essence of maintaining the high standards and quality of hosting the Games.

He said Ghana must understand that it was the first time the country was going to host the African Games, so it was important that quality and standards were not compromised by the LOC and all stakeholders in the continental showpiece.

“We cannot host the Games without having officials, especially Ghanaian officials. Everything now boils down to adopting the right strategies.”

Dr Ofosu-Asare gave the assurance that the LOC was on course in terms of getting things done benchmarked on global standards but there was the need for every stakeholder, including the government, corporate bodies and the entire Ghanaian community, to rally behind the LOC as they work hard to host the best ever African Games in Accra next year.

He used the opportunity of the one-year countdown to tout some of the benefits Ghana would gain form hosting the African Games, and also invite Africa’s best athletes to gather in Accra next August for the sporting festival in 20 disciplines.

For him, it was important for the business community to partner the LOC to exploit the huge benefits the continental event would offer them.

“The ripple effects on our economy would be staggering. If you look at how businesses are benefitting from the Commonwealth Games in Birmingham, we can can do the same,” he said.