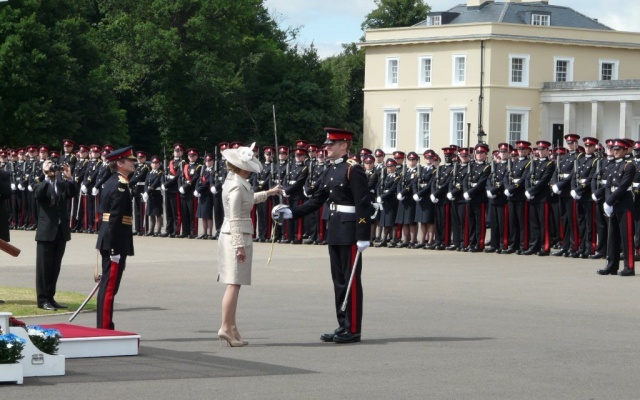 A Ghanaian military officer in the United Kingdom will on Friday be honoured for his exceptional standard during his training at the Royal Military Academy Sandhurst (RMAS).

Officer Cadet Gershon Anerboi Abbey who is among over 160 Ghanaian Army Officers receiving training from the RMAS will be the first Ghanaian officer to receive the award.

A statement issued by the UK government on Wednesday said OCdt Abbey will be presented with the International Sword of Honour by HRH, the Duke of Cambridge, Prince William at the Sovereign’s Parade to mark the successful completion of his training.

“This award is the premier award available to international officers; it is presented to the best International Officer Cadet and OCdt Abbey, who is the latest of over 160 Ghanaian Army Officers to graduate from Sandhurst, has beaten stiff competition from officers drawn from across the world. This is an historic achievement by a young officer who has delivered a performance that has been described as ‘superb’,” the statement said.

Describing OCdt Abbey’s achievement as “immense and historic”, the statement noted that the RMAS has moulded generals, including Ghana’s Chief of Defence Staff and Chief of Army Staff, Heads of State and captains of industry.

“No other Ghana Army Officer has received this prestigious award. It is extremely fitting therefore that he will receive the International Sword from Prince William, as the personal representative of HRH The Queen, at the Sovereign’s Parade on Friday 14 December 2018.”

On his part, the United Kingdom Defence Adviser to Ghana, Lt Col Simon Westlake RM, said “OCdt Abbey’s achievement is inspiring and reflects determination, commitment, but above all professionalism in all areas; Ghana can be proud of this fine young man. He has not only set an example to his Ghanaian colleagues, but to all officers at RMA Sandhurst.”

OCdt Abbey is expected to return to Ghana shortly after the Parade to assume his duties with the Ghana Army.

The Royal Military Academy Sandhurst (RMAS) is where all officers in the British Army are trained to take on the responsibility of leading their fellow soldiers.

During training, all officer cadets learn to live by the academy’s motto: ‘Serve to Lead’.

Other Nations choose to send their personnel to RMAS for Officer training because it is recognised as a world leading military training academy.