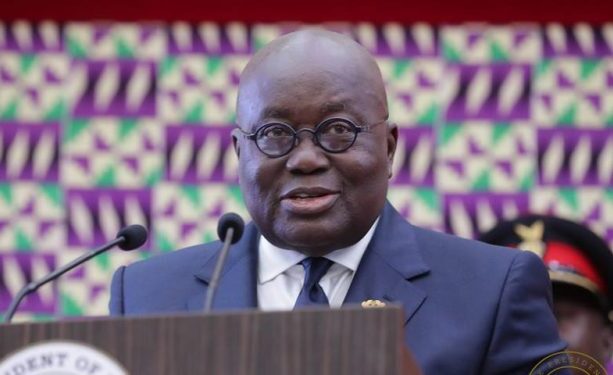 President Nana Akufo-Addo has revealed that the country spent a whopping amount of unbudgeted funds in the two-year fight to contain the COVID-19 pandemic.

In a State of the Nation Address (SoNA) delivered to Parliament on 30 March 2022, President Akufo-Addo said:

“In all, data from the Ministry of Finance tells us that an amount of GH¢17.7 billion (or 4.6% of GDP) has been spent in containing the pandemic since 2020”.

President Akufo-Addo told Parliament that his administration “saved lives and fared much better than we had feared and the experts predicted, but the consequences of lockdowns, border and business closures and unplanned expenditures have combined to have a devastating impact on our economy”.

Explaining how the government spent the funds, he said the expenditures included, but were not limited to, the recruitment, on a permanent basis, of 58,191 healthcare professionals, and the payment of extra incentives to our frontline health workers.

He also indicated that: “It took an unbudgeted GH¢1.9 billion to ensure that our children and teaching staff went back and stayed in school safely”.

He continued: “We provided nearly five million (5 million) households and over ten million (10 million) people with electricity and water subsidies at the time they were most needed”.

President Akufo-Addo was concerned that “some, including a few in this Honourable House, went as far as to accuse the government of trying to kill Ghanaian children when we introduced the controlled school re-openings”.

According to him, “in some countries, school closures have lasted for 20 months, and children are only now going back to school. Our children did not lose a single academic year”.

The government has come under scrutiny over its expenditure relating to COVID-19.

The funds were sourced from several agencies including the World Bank and the International Monetary Fund to mitigate the impact of the pandemic.

Additionally, the government set up a COVID-19 Trust Fund headed by former Chief Justice, Sophia Akuffo, to receive public contributions to help improve the lives of the vulnerable who will be worst hit by the pandemic.

In its July 2021 Article IV Consultation Report on Ghana, the IMF “encouraged the timely completion of the planned audit of COVID‑19 emergency spending and new expenditure arrears.”

This was to ensure transparency in the utilisation of funds allocated for the fight against the pandemic and boost public confidence.

Updating the public on expenditures in February 2022, Minister of Health, Kwaku Agyeman-Manu, said the government spent $305.42 million out of the total of $430.00 million released by the World Bank for the country’s COVID-19 response.

He said the amount was used in the procurement of items including vaccines and medication.

The sector minister further noted that aside from the expenditure funded by donor partners, the government also spent an additional GH¢ 662,541,104.53 on the country’s COVID-19 response.

However, the Minority in Parliament was not satisfied, as the MP for Ajumako-Enyan-Esiam and Ranking Member for the Finance Committee, Cassiel Ato Baah Forson, moved a motion in February 2022 for Parliament to constitute a bi-partisan Committee to look into the activities of the government with respect to COVID-19 expenditure.

But this was dismissed by First Deputy Speaker of Parliament Joseph Osei-Owusu when he presided over parliament in the absence of the Speaker, Alban Bagbin.

According to the NPP MP for Bekwai, the motion, earlier admitted by the Speaker, should not have been admitted and that same was not properly laid.