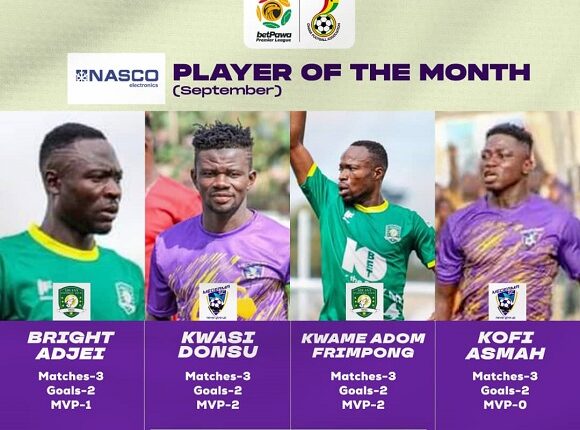 The Ghana Football Association (GFA) has shortlisted top performers for the 2022/23 Ghana Premier League NASCO Player of the Month and Coach of the Month awards for September 2022.

Four players have been shortlisted based on their brilliance in matches played during the period.

Captain of the Aduana Stars, Bright Adjei, has been very instrumental in the team’s attack scoring two goals in three games and in the process winning one MVP title.

Donsu has scored two goals in three appearances for fourth-placed Medeama in the month of September and won two MVP titles for his effort.

Frimpong has scored two goals for Aduana since joining the team from Asante Kotoko, he also has two MVP awards for his effort.

Asmah has been shortlisted after scoring two goals in three appearances for the club in September. Meanwhile, three coaches who led their teams to impressive results in September have also been nominated for the NASCO Coach of the Month Award.

Below are the nominees for the Coach of the Month- September:

Coach Preko led Great Olympics to two wins, and a draw in September, scoring three goals and conceding one.

Olympics are third on the league log with 7 points after 3 matches played.

In September, coach Fabin led Aduana Stars to two wins, and a draw, scoring six goals and conceding four in the process.

The Ogya lads are second on the league log with 7 points.

Coach Ennin secured two wins and one draw, scoring four goals and conceding only one.

The team currently sits top of the league standings with 7 points.

Winners will be announced by the FA soon and will receive a Television set each from sponsors Electroland.
Story By kobby Asamoah/ k.boahene@theghanareport.com
Leave A Comment
Cancel Reply
You might also like
Sports