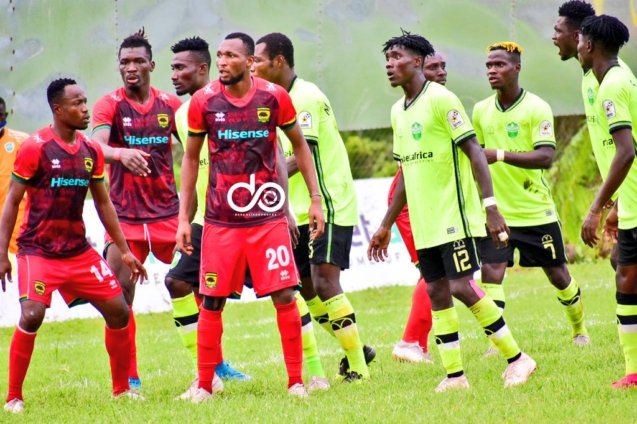 Kumasi Asante Kotoko started their post-Maxwell Konadu era with a vital 1-0 victory over Dreams FC at the Theatre of Dreams in Dawu on Sunday.

Kotoko, who sacked Konadu on Friday, got the only goal of the game through left-back Ibrahim Moro, who finished off a rebound with a brilliant strike from inside the box.

Accra Hearts of Oak recorded their second victory of the season with a 2-1 win over King Faisal on Saturday.

Benjamin Afutu put the visitors ahead in the 20th minute from close range before Wadudu Yakubu put the home team on level terms in the 50th minute.

Hearts of Oak were awarded a late penalty after Pius Baffour Awuah handled the ball in the box with just a minute to the end of regulation time.

Umar Manaf stepped up to score from the resultant penalty to give the visitors a 2-1 victory.

The draw means Medeama are yet to win a game at home this season.

The result sees Liberty Professionals in 9th place while Medeama sit in 13th.

Elmina Sharks defender Issaka Mohammed won the Man of the Match award as his side beat Inter Allies 1-0 at home on Sunday.

Benjamin Tweneboah’s first-half penalty was all the visitors needed to grab all three points to return to winning ways.

Elsewhere in Techiman, Eleven Wonders were held to a 1-1 stalemate at the Ohene Ameyaw park by AshantiGold.

The Miners preserved their unbeaten start to the season with a late equalizer from substitute Samed Ibrahim.

Wonders took the lead early in the first half through Salifu Ibrahim in the 10th minute before the miners leveled in the dying embers of the game.

Ten-man Great Olympics held on to beat WAFA 1-0 at the Accra Sports Stadium.

Gladson Awako’s first half goal was enough for the home side, condemning WAFA to their second defeat of the season.

In Friday’s action, Bechem United handed Karela United their first defeat of the 2020/2021 Ghana Premier League season with a 2-1 win at the Nana Fosu Gyabour Park on Friday.

Stephen Owusu opened the scoring for the home team in the 46th minute but Karela equalized through Taylor Diawisie in the 56th minute.

Listowel Amankona snatched a 90th-minute win for Bechem when he latched onto a rebound and put the ball in the net to secure victory for the home team and move the Hunters top of the GPL table.

Benjamin Acquah’s first-half brace was enough to secure Ebusua Dwarfs their first win on the road this season with a victory over Legon Cities.

Acquah scored twice before the half-hour mark, but Legon Cities pulled one back right at the stroke of half time through defender Joseph Adjei.

The result leaves Legon Cities in bottom place on the log with just three points from six games.