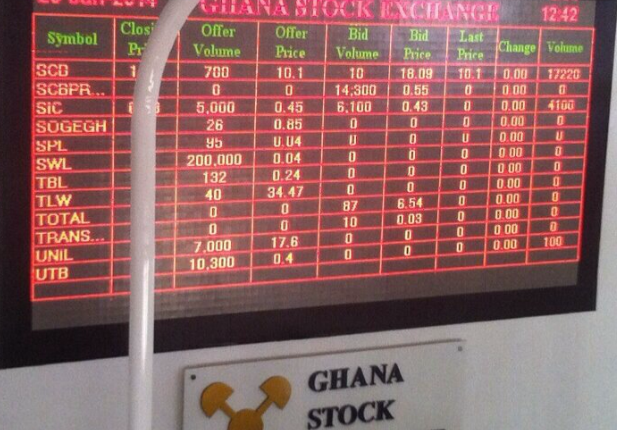 The Ghana Stock Exchange (GSE) has failed a historic test of raising a combined amount of GH¢4.7 billion in six months, due to low investor interest in the bourse occasioned by the closure of seven banks.

Another contributing factor was the high yields on government securities, which made them a better alternative for investors seeking firm security and handsome returns for their investment.

At the end of the last offer in November, data from the GSE showed that the market had successfully raised GH¢1.8 billion for Republic Bank, Societe Generale and Access Bank and telecom giant, MTN, representing just 38 per cent of the amount that the listed firms and new entrants were hoping the GSE would raise for them.

A successful raising of the funds sought for through the three rights issues and two initial public offers (IPOs) would have opened a new chapter in the 29-year-old history of the GSE as a large and deeper exchange capable of containing multiple multibillion cedi transactions concurrently.

It would have also aided the banks to recapitalise smoothly, stimulated growth in the companies and ultimately spurred growth in the non-oil economy, Mrs Doris Ahiati, who has followed the market for 15 years, said in an interview.

“If we were able to achieve all those funds, it would have reflected in the GDP but as it is now, I think it is oil that is driving the growth,” she added.

On the reasons for the failure, two analysts, Mr Alex Boahen of Databank and Mrs Brenda Kissi of StanLib Ghana Limited, said in separate interviews that although the market’s inability to raise the amount was a confirmation of earlier sentiments, it was partly the outcome of the ongoing clean-up in the banking sector, which led to the revocation of the licences of seven banks with deposits of about GH¢10 billion, and the generally handsome returns on risk-free government securities.

Other causes were the generally shy nature of pension funds to the stock market and investor flight to foreign markets, where rates were more appetising, Mr Boahen and Mrs Kissi, who specialise in stock market research and fund management respectively, said in the December 10 interviews.

Mrs Kissi, who is the Fund Manager of StanLib, a fund management firm with some US$500 million assets under management (AUM), told the GRAPHIC BUSINESS that the collapse of the banks created a panic situation in the sector and that placed pension fund managers “in a flight to quality and safety mood.”

Pension fund managers sit on close to GH¢10 billion of funds and are allowed to invest a maximum of 35 per cent with banks.

However, Mrs Kissi, whose firm controls about 74 per cent of the industry’s business, said “the troubles in the banks” caused some fund managers to step up investments in government-backed papers, a risk-free portfolio that the companies are allowed to invest up to 60 per cent of their assets in.

“Right now, people are just going Government of Ghana (GoG) because it is perceived to be safe and it is giving you the returns you want but that is also hurting equity,” she said.

The firms are allowed to invest a maximum of 20 per cent in equities but StanLib’s Fund Manager said her company currently had less than six per cent of its assets in equities – similar to the industry average of around six per cent.

Despite holding the funds, pension fund managers are not the final determiners of how much should be invested in what; the trustees are entrusted with that mandate.

Mrs Kissi and Mr Boahen said that arrangement restricted the industry’s appetite for equities, which reflected in the low success rate of this year’s transactions on the equity market.

Mr Boahen added that the low liquidity on the bourse made it difficult for fund managers to sell and/or buy en bloc hence their general aversion to stocks.

With government securities selling and trading at 14 per cent and above 20 per cent in the primary and the secondary markets respectively, Databank’s Head of Research said investors found it “profitable to play on that side of the market rather than come to the stock exchange”.

“So, until we have interest rates coming down significantly and sustained at that level, we will have pension funds, especially the domestic ones, continue to focus on the fixed income market to drive their portfolio returns,” Mr Boahen, a stock analyst and researcher of eight years’ experience, said.

Going forward, Mrs Ahiati, who is chartered investment banker and CEO of Crescendo Ltd, said a successful completion of the ongoing recapitalisation of banks would rebound confidence in banking stocks.

Together with the financial sector clean-up, she expects investor interest in financial stocks to rebound and that should ultimately improve the performance of the bourse.

The GSE closed December 6 on a bearish note, with the year-to-date changes of the Composite Index (CI) and the Financial Stocks Index (FSI) at 1.11 per cent and negative 4.43 per cent respectively.

The FSI, which tracks the performance of banking and insurance stocks, controls about 60 per cent of the bourse’s movements.