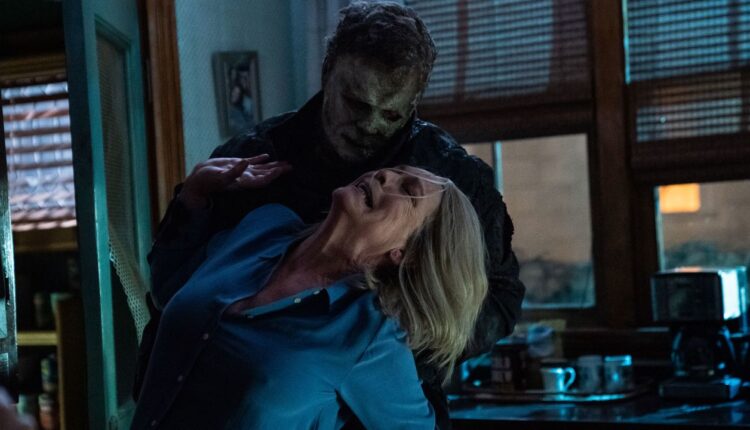 Forty-four years, 13 movies and innumerable corpses later, it sounds naïve to think “Halloween Ends” will really mark the end of anything, but like the holiday for which it’s named, it’s fun to pretend.

The producers do seek to bring finality to this latest trilogy featuring Jamie Lee Curtis although that turns out to be the only original idea they conjure in an odd, tedious film.

Indeed, movie No. 13 turns out to be not so lucky, creatively speaking, as director/co-writer David Gordon Green takes his third consecutive turn in that chair. Part of that has to do with an attempt to connect this slasher franchise to deeper contemplation about the nature of evil, which merely yields laughably awkward moments in the wrong places.

That’s not to say those who go to the theater (or tune in via Peacock, NBCUniversal’s streaming service) won’t be treated to jump scares, twists, an homage to director John Carpenter’s “The Thing,” and moments of extremely over-the-top gore. It’s just that the preliminaries to what amounts to the main event drag on, and the underlying desire to try something a little different falls thuddingly flat.

Curtis’ Laurie Strode has certainly paid a high price for her decades-long dance with the killer Michael Myers, a.k.a. The Shape, but a few years after he’s disappeared she’s trying to maintain a sense of normalcy living with her orphaned granddaughter, Allyson (Andi Matichak). In fact, Laurie takes the initiative and introduces Allyson to Corey (Rohan Campbell), a shy guy bearing emotional scars from his own Halloween-timed tragedy, which risks making them the weirdest possible soulmates.

Laurie also has a sweetly uncomfortable encounter with the local cop (Will Patton), so the efforts to inject touches of romance into the movie occur on two generational tracks. Still, nobody comes to “Halloween” expecting “The Notebook,” so those interludes have the tiresome sensation of killing time until it’s time to get down to the killing, which unfolds at best with efficient but uninspired predictability.

It’s been four years since “Halloween” relaunched the franchise – delivering a huge opening weekend – with an extra-long gap before the sequel “Halloween Kills” due to Covid. Yet if the wait was shorter this time, the rewards are again small.

As noted, this longstanding horror franchise has been too reliable an attraction for Universal and its partners to stay dormant forever, although an extended rest seems prudent. The promise of putting “Halloween” in the rear-view mirror is obviously in part a marketing ploy, but the studio should use the opportunity to take inventory of what makes sense for The Shape of things to come.

“Halloween Ends” premieres October 14 in US theaters and on Peacock. It’s rated R.