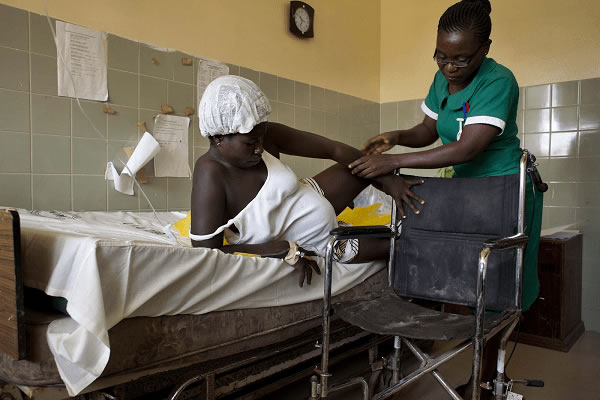 The woman was in labour for a long time without significant progress. So, the midwives told the husband to sign a consent form for an emergency caesarean section to deliver the baby. The husband refused.

Health professionals allayed her fears, but no grammar could change his mind about consenting to his wife going under the knife.

His wife was in obvious pain and mention to her husband that she was ready for the C-Section. The husband still did not budge to her wife request.

Finally, the midwives made the woman understand that she could consent herself for the operation to be done. She didn’t waste time and gave an express approval. She was prepped and the C-section was done successfully.

Well, methinks, the husband refused to consent because he loved the wife so much to sanction the operation (feared the outcome of the operation) or he was not willing to bear any cost that might have arisen from the operation.

It is a common phenomenon for husbands to refuse to consent for C-section for their wives in prolonged obstructed labour. The refusal could be genuine — fear of losing the wife — or that genuine cost factor. However, one thing these husbands do not avert their minds to is the fact that not doing the C-Section in time can also kill the mother and the baby.

You will be wrong to presume that husbands who refuse to consent to their wives having C-section are illiterates. Some of those who reject it are very much well educated. I witnessed a teacher flatly refusing to consent to his wife having CS. When all attempts to convince him failed, they were referred (as the last resort).

It’s important for women to know that they do not need the express legal approval of their husbands to undergo any form operation including CS. They are adults and can consent themselves.

However, a woman (learned in The Good Doctor) cannot give sole consent for her unborn baby to be operated on if the man is against it. The man has a stake in the baby too.

One factor that influences or douses women’s capacity and willingness to consent to their surgery, in time of family misunderstandings, concerns who signs the cheque on the bills. Consent and get ready to pay the bills!

Well, caregivers, especially midwives need to discuss the possibility of CS delivery with couples expecting a baby. So they can thrash out all necessary misunderstandings that could arise at the eleventh hour. It’s difficult for couples to make a decision on CS if a health professional moot it at the crucial stage of labour riddled with lots of anxieties and can’t-think-clearness.

A timely caesarian section can save two lives!