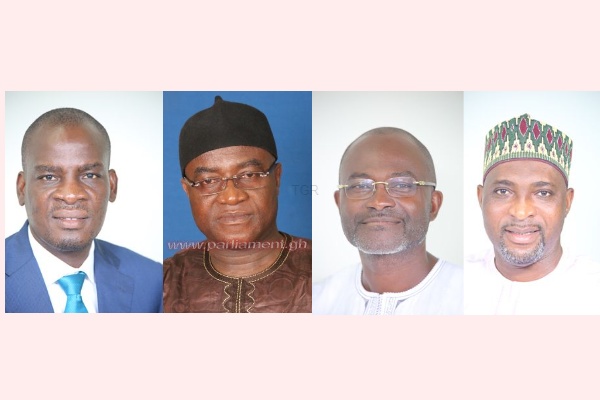 Here are the nine ‘Mugabes’ sworn into the 8th Parliament

Following the 2020 parliamentary elections, nine legislators have maintained their status as ‘Mugabes’, a term used for politicians who have served long terms in office.

These nine most experienced MPs sworn into office in the early hours of January 7, for the 8th Parliament of the Fourth Republic represent a reduction by half.

As much as 18 politicians had served in the legislature between 16-28 years in the Seventh Parliament of the Fourth Republic, which began on January 7, 2017, and ended on January 6, 2021.

The term ‘Mugabe’ was coined from Robert Gabriel Mugabe, a politician who became Leader and President of Zimbabwe for 37 years. He served as Prime Minister of Zimbabwe from 1980 to 1987 and then as President from 1987 to 2017 before passing away in 2019 at age 95.

Mr Mugabe had strong ties to Ghana as he relocated from Zimbabwe to Ghana in 1958 to work at St Mary’s Teacher Training College in Takoradi.

He went into teaching after obtaining local certification at Achimota College, where he met his first wife, Sally Hayfron.

At the time Ghanaians decided to use his name to describe long-serving politicians, he was one of the longest-serving presidents on the continent.

Mr Tuubo proceeded to win the seat for the NDC in the 2020 elections.

The remaining longest-serving MPs were undisputed winners after the close of polls in the December 7 elections.

The opposition NDC has the majority of six while the governing NPP has only three.

They shook off attempts to knock them off and their service in the next parliament would be at least five terms for each of them.

The surviving nine are:

The MP for Suame in the Ashanti Region is the most experienced legislator for the governing NPP.

He entered the House as a member of Old Tafo Suame in 1996 but now represents Suame since the constituency was split.

He has served six terms in Parliament and the next will be his seventh.

He is the Minister of Parliamentary Affairs and an Urban Planner.

He is Chair of three Parliamentary Select Committees but serves on seven committees in total.

Before the NPP primaries, he advocated the protection of the leadership of the party in parliament.

He went unopposed and won the seat again for the NPP.

Mr Agyapong represents Assin Central in the Central Region for the NPP.

The controversial lawmaker was first elected  MP in 2000 for the Assin North seat.

In 2012 he was elected as the MP for the newly created seat of Assin Central and was re-elected in 2016.

He is a member of the House Committee and also Chairs the Local Government and Rural Development Committee.

He has made comments in the past, suggesting retirement, but contested unopposed and will represent his constituency on the ticket of the NPP in the next parliamentary elections.

His constituency is a stronghold of the NPP, and so it was not surprising that his constituents renewed his mandate given his influence in the area.

He is MP for Adansi-Asokwa Constituency in Ashanti Region.

Mr Hammond is a lawyer, and he has been an MP since January 2001 to date, serving five terms.

He is currently a member of the Finance Committee and Mines and Energy Committee.

He was a former Energy Minister in the Kufuor administration.

He won the mandate of the delegates again at the just-ended NPP primaries to represent the constituency in the next elections.

He won by 236 votes as against 170 by his challenger, Mr Samuel Binfoh Dakwa.

His constituents have never sent any other party to Parliament apart from the NPP.

Even though there was a little controversy over the party’s primaries he prevailed and got retained.

He is the MP for Asutifi South Constituency in the Brong Ahafo Region.

He was first elected to parliament in the 1996  election on the ticket of the NDC, making him the first MP for the Asutifi South in the Fourth Republic.

He, however, lost his seat in the 2000 parliamentary election partly due to an allegation that he had used ‘juju’ to kill his political rival, Prof. Gyan-Amoah, just a day before the general elections. He, however, regained his seat in 2004.

Between 2002 and 2004, when he was out of parliament, he was the Regional Chairman of the NDC in the Brong Ahafo Region.

He was the Ranking Member for the Lands and Forestry Committee.

Additionally, he serves on the Finance Committee and the Committee of Selection Committee.

He is the MP for the Wa Central Constituency in the Upper West Region. He holds a PhD in Development Policy from the University of Ghana.

He serves on four committees in parliament.

Mr Pelpuo is the Ranking Member for the Government Assurance Committee and serves on three others.

Mr Pelpuo was the Minister of State at the Office of the President when he was appointed Minister for Youth and Sports by President John Atta Mills in September 2009 following the resignation of Muntaka Mohammed Mubarak, who was also MP for Asawase.

He served in this capacity until a cabinet reshuffle in January 2010 when he was replaced by Ghana’s first female Minister for Sports, Akua Dansua and appointed Deputy Majority Leader in Parliament instead.

In the John Mahama administration (2012 – 2016), he was appointed the Minister of State at the Office of the President in Charge of Private Sector Development and Public-Private Partnership (PPP).

He was also a member of the Economic Management Team (EMT).

He won the mandate again in the NDC primaries in 2019 and has been retained for the next parliament.

Alhaji Muntaka is the MP for Asawase in the Ashanti Region and the Majority Chief Whip.

He has served in Parliament for four terms. He is a member of six committees of Parliament.

He first entered Parliament in 2005 when he won a by-election in the Asawase constituency to replace the late Dr Gibrine, also of the NDC, who had won the seat in December 2004.

He was the Minister for Youth and Sports. Alhaji Muntaka was asked by the then President Mills to proceed on leave while allegations of corruption levelled against him were being investigated.

However, he resigned from the government following the acceptance by Professor Mills of the findings of the investigating committee.

Asawase is one of the few NDC strongholds in the Ashanti Region. The region is the ‘world bank’ of the NPP.

The ability of the Minority Whip to retain his seat appeared shaky as the NPP took a serious interest in unseating him.

He, however, emerged victorious to represent his party again in the next term.

He is the MP for Tamale South and Minority Leader of the 7th Parliament of the 4th Republic in Ghana.

He stood for parliament in the 2004 election in the then newly formed Tamale South Constituency. He has since been a member of the last four parliaments in the 4th Republic.

He has held several positions including Minister for Communications under the Mills and Mahama governments, and Minister for Trade between 2013 and 2014.
He was appointed Minister for Employment and Labour Relations by President Mahama in July 2014.

He serves on six committees in parliament. He is Vice Chairman for one committee and Ranking Member for three others.

The vocal and respected Minority Leader will return to the house. The NDC has always won the Tamale South seat.

He is the Chairman of the Public Accounts Committee (PAC) and a member of three others.

James Klutse Avedzi worked as the principal accountant at the Controller and Accountant Generals Department in Accra before seeking political office in 2004. On the ticket of the NDC, he contested and won the parliamentary seat in 2005.

He has since served four terms and hopes to add a fifth in 2020.

The Deputy Minority Leader will certainly return to the next Parliament. His constituency in the Volta Region had always voted for NDC.

Mr Ahi is a legislator representing the Bodi Constituency in the Western Region on the ticket of the NDC.

He entered parliament on January 7, 2005, representing the Juabeso constituency on the ticket of the NDC. He represented the constituency until 2012 when he stood for the seat of the then newly created Bodi constituency.

Prior to entering parliament, Ahi worked as a sector manager for Armar Jaro from 2003 to 2004.

Not all MPs who have attempted to be Mugabes have been successful.

That envious ‘title’ has eluded at least five MPs who were voted out in the 2020 election after serving three successive terms.

This group of legislators include: