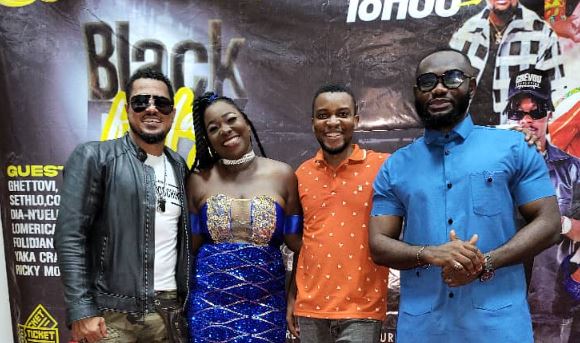 Hosting an event in Togo was hell – Van Calebs

Ghanaian event organiser, Van Calebs has bemoaned the hellish experience he had during an attempt to stage a big event in Togo.

The show, dubbed “Black Friday’, was billed to serve patrons with great entertainment through music, fashion and sports.

With a host of Ghanaian and Togolese artistes lined up for the event, expectations and confidence were high within the camp of Van Calebs.

The team was also optimistic that the Palais de Congress event centre was going to be filled to capacity.

But despite the presence of Ghanaian celebrities like Van Vicker, Prince David Osei, Patapaa, Chief One, Jah Phinga and a host of A-list Togolese artistes and entertainers, the auditorium was almost empty.

In view of this, the organizers had to wave the charge and make it a free for all event in order to get people into the auditorium.

Van Calebs described the development as “the worst day of my life”.

According to him, the objective of the show was to contribute to the revival of entertainment in Togo but the local promoters he trusted and paid to market the event sabotaged him.

“I had to personally start bringing in people to enjoy the show for free. The Togo people felt threatened that we were going to make it big so they sabotaged our show. I cried all night.

“Investing in entertainment in Togo is worse than entering hell fire. As a person with over a decade of experience in the event and advertising industry, this has been my worst experience so far,“ he emphasized.