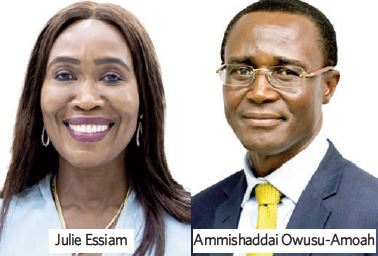 Ghana Revenue Authority (GRA) Commissioner General, Ammishaddai Owusu-Amoah, is due for retirement in the days ahead if his contract is not extended.

However, the jostle for the top position has intensified as interested parties dust their CVs to impress the appointing authority.

The race to succeed Ammishaddai Owusu-Amoah, is becoming hectic as a tall list of wannabes has emerged.

Mr. Owusu-Amoah, who clocked the retirement age of 60 years last year and was given one year contract, is expected to bow out by October 10, 2022, making the position vacant.

However, he is not giving up on the position as he is lobbying to stay on even after the Ministry of Finance issued a notice that clearance will not be given to post retirement contract staff.

In a statement signed by a Deputy Minister of Finance, Abena Osei Asare said the government has, with immediate effect, suspended the granting of approval for Post-Retirement Contract Appointment.

According to the ministry, such a request can only be granted in cases where the skills of the retiring officer are in short supply and unavoidably needed.

Ammishaddai’s legacy is before the Special Prosecutor where the GRA is being investigated over procurement breaches as well as the construction of its new head office building where over GH¢70million was allegedly paid to DEVTRACO for over one year with no job done. The contractor has now moved to site at Kanda near the Jubilee House.

The contract for the project is said to be overpriced, prompting the Special Prosecutor to look into the case.

GRA has refused to talk to DAILY GUIDE on some of the procurement issues despite sending questions to the revenue collection body.

Interestingly, all the wannabes who are angling to take over the GRA plum job have already reached the retirement age of 60 years, including Julie Essiam, Commissioner responsible for the Support Services Division of the Ghana Revenue Authority.

Julie, who is seriously lobbying at the Finance Ministry to take over from Ammishaddai, is said to have clocked 60 years in July, but falling on her godfathers to renew her mandate despite the serious doubts about her qualifications.

According to sources, the Public Service Commission (PSC) was yet to approve her appointment as Commissioner but her aide, Ken Koduah, denied the allegation in a chat with DAILY GUIDE.

Koduah also said Julie is yet to clock 60 years, claiming that she just celebrated her 58th birthday.

Julie reportedly dropped out of GIMPA in her latest attempt to upgrade herself.

She believes she is capable of handling the portfolio even though there are dark clouds hanging around her current position in the areas of procurement.

Sources told DAILY GUIDE that Julie’s appointment in 2019 received protestation from the party because she was completely alien to the ruling party, including its senior officers such as the immediate past General Secretary, John Boadu.

With the impending exit of Ammishaddai, she is lacing her boots for a push to the top GRA position using her powerful contacts in the government establishment.

Also in the race are Isaac Crentsil, former Commissioner for Customs Division of GRA who was shipped to the Ministry of Finance along with Julie’s predecessor, Fred Charles Anson.

DAILY GUIDE will scrutinise the other wannabes in due course.