Seated under a mango tree in front of a dilapidated structure is 37-year-old, Adwoa Yeboah. Disfigured.

All her ambition is simply how she will feed her 7-month-old twins for the day.

To her, getting one meal for her twins is ambitious talk less of having a three-square meal; that would be too ambitious.

It is not in her nature to depend on the benevolence of others but her present physical look has denied her the chance to work.

Adwoa Yeboah was involved in an accident that has robbed her of her “life”.

It all happened when she was returning from one of her business trips.

Adwoa lived her normal life at Ohwimase Hilltop in the Ashanti Region with her family.

“I trade in fruits so I travel to nearby villages like Mfensi and its environs to buy fruits but on this day, I traveled with my husband because one of my suppliers had advised that I introduce him to the trade”.

“The car was not full when we were returning, so the driver kept picking passengers by the roadside” she narrated.

Even in her third trimester of pregnancy, Adwoa was very much active and went about her trade, very hopeful that she will sell her goods on time.

“At some point, we picked a middle-aged man carrying two barrels and three galloons. I later learned that the man was into herbal medicine production, so it was alcohol (Akpeteshie) and acid he had in the barrels” she recounted.

Not long after the man had joined the car, the driver failed his brakes.

“When we passed Ntensere the driver lost control over the steering wheel, and the car kept tossing around,” she said.

In an attempt to mild the ramification of the failed brake, the driver rammed into a tree, “and the substances in the galloon and barrels spilled over us,” she said.

A singular decision that cost the lives of all the occupants of the vehicle – except Adwoa.

“The car caught fire,” she said amidst tears.

The only survivor lost her left eye through the accident.

“Beyond the fire, I do not know what happened except that I woke up in a hospital bed fully bandaged”

“My husband was the first person I asked after I gained consciousness and I was told he had been discharged,” she said sobbing.

The pregnant woman battled for her life for over 6-months in the hospital bed, dealing with burns and grieving her husband.

“So, it was left for me to recover but I had a burning sensation all over my body, the pains were just unbearable.”

“I pleaded with the doctors to kill me,” she said

Adwoa had her whole body patched.

“The doctors did not give up on me, they did all they could to save me, I underwent more than three plastic surgeries,” she recounted. 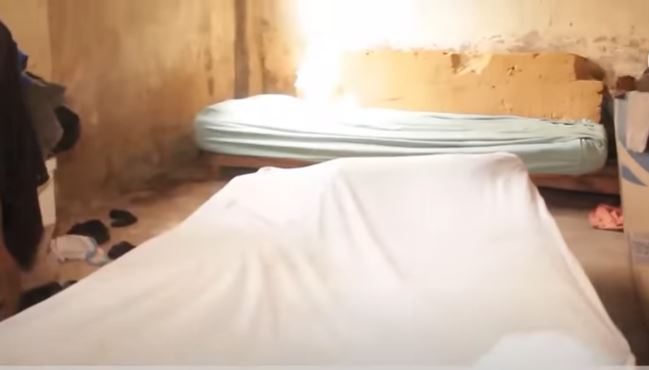 While enduring the pains from the burns, Adwoa had to go through labor pains.

“Because of the accident my due date delayed, I cannot find words to describe the excruciating pains I went through.”

“ I couldn’t relate to the saying that life is tough until my due day,” she added.

Pregnancy puts the life of the mother in danger and Adwoa was a high-risk pregnant woman.

She could not push out the babies neither could she be operated on because she had already undergone multiple surgeries.

Her situation left medical officers at the SDA hospital in a dilemma.

After enduring the agonizing pains Adwoa delivered her twins but through assisted birth.

“I couldn’t push out my twins, they were pulled out” she added.

The joy of being a new mother despite her condition was short-lived when she was hit by the news of her husband’s death.

“After their birth, I returned home and requested that my husband comes to see me and the children”

“Then I was told he had died, I went blank,” she said sobbing.

Life after the accident

New mother, fresh wounds, Adwoa had to ‘man up’ and cater to her twins.

“My husband and I bought a land but when the incident happened, I had to sell it to pay for the hospital bills, no family member came in to assist”

“Now I am left with nothing and with my current look, there is no way anyone would want to employ me,” she added.

The mother of three fetches water to households for a living.

“I had to do something because as a new mother I needed to eat well for breast milk and also feed my children but there was no money, so I go to the stream to fetch water for people. Sometimes, I wash people’s dirty clothes so I can get some GHC5 for the day”

“I  have been so broke that at some point, I was using black polythene bags as diapers for the twins” she added.

Having to juggle between motherhood and work, Adwoa said “sometimes, I have severe body pains, no energy to do anything so I just go out begging for alms, some give me but others too shy away when they see me coming”

“Life is difficult,” she told CrimeCheck Foundation in an interview.