The 2020 flagbearer of the main opposition NDC has promised to legalise ‘okada’ if elected.

John Dramani Mahama said the use of motorcycles and tricycles as a kind of taxi is a source of jobs for the youth that must be acknowledged.

“Okada is a reality, it has come to stay, you can’t stop it” he addressed the chiefs and people of Kpando in the Volta Region.

“I say when we come into office we will legalise okada but we will regulate it,” he promised. 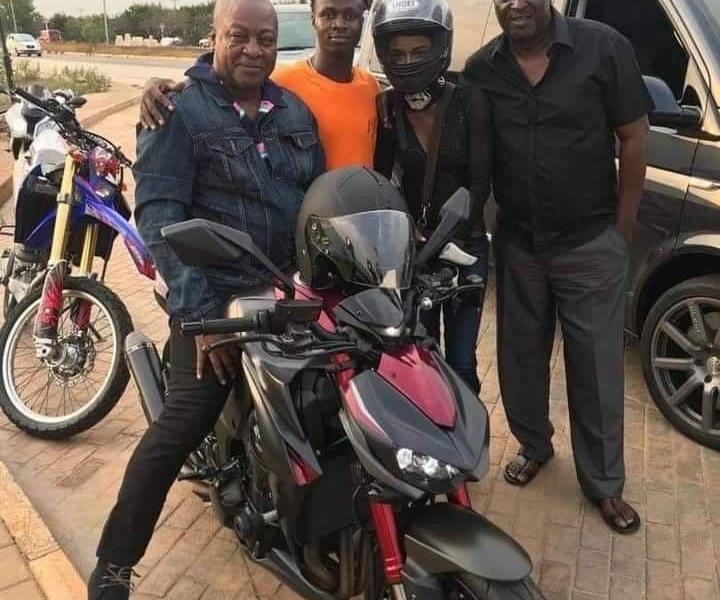 The prohibition of motorcycles for commercial vehicles was informed by safety and security, and it is grounded in law as captured by Road Traffic Regulations, 2012 (Legislative Instrument 2180).

Section 128 (1) of L.l. 2180 states–– “The licensing authority shall not register a motorcycle to carry a fare-paying passenger.”

Section 128 (2) states –– “A person shall not permit a motorcycle or tricycle which that person exercises control to be used for commercial purposes except for courier and delivery services.”

Section 128 (3) states –– “A person shall not ride on a motorcycle or tricycle as a paying passenger.”

He told the ghanareport.com that okada is the means of income for his family and government needs to address the situation to review the law.

He insists, “If this thing is not legalised so far as unemployment is concerned” it will create poverty and render hundreds of people jobless”.

For the Chairman of the Greater Accra Regional Okada Riders Association, Tijani Mohammed, his work as security at the Tema Metropolitan Assembly (TMA) fetches him a meagre GHC 380.

The 52-year-old man from Chereponi explained: “From 2010 I got a grasp of the okada business and could make about GHC200 a day”.

In a bad month, he can generate at least GHC800 to provide for his wife and four children together with his late brothers’ three kids.

Data collated from the Korle Bu Accident and Emergency (A&E) Unit from January 2017 to June 2019 showed that 59 persons died while 20 others were amputated out of a total of 2,563 accidents related to okada.

The statistics for a two-and-half-year period showed that majority of the accident victims were active and productive persons with ages between 18 and 37. All the deaths were males.

“Over 90% of them are all young, energetic men between the ages of 20 and 28 who are the economically active people who are providing revenue for the country,” Head of the Accident, Emergency and Orthopaedic Department at the KBTH, Dr Frederick Kwarteng lamented in an interview with theghanareport.com

The Head of Regulation, Inspection & Compliance at the NRSA, Kwame Koduah Atuahene, cited the 2019 provisional figures and noted,“it is obvious that out of every three deaths, one is motorcycle related. If you look at the data in the last 10 years…it has gone up by 400%”.

The Head of Education Research and Training at the Motor Transport and Traffic Directorate (MTTD) of the Ghana Police Service, Superintendent Alexander Obeng, confirmed the worrying trend.

“In recent times, of 100 deaths you are likely to attribute 33 to motorcycles,” he pointed at while explaining the challenges the directorate was battling in tackling the menace.

The ghanareport.com has done extensive research on the okada business in Ghana which will be published in the coming days.

Botswana allows wives to own land

GH₵500,000 stolen in madrush for cash as bullion van crash kills one