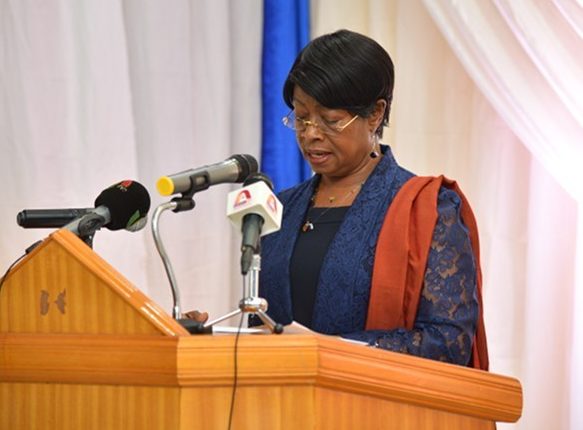 The Chief Justice of Ghana, Justice Sophia Akuffo, has signaled that as long as she supervises legal education in Ghana and the Judicial System, she will not allow the mass production of lawyers in the country.

According to her, the mass production of lawyers poses a great danger to the people of the country who would require the services of a good lawyer in their life time.

Addressing the Bench, Bar and Faculty Conference at the Labadi Beach Hotel on the theme “The Changing Landscape in the Law – the Judge, the Lawyer and the Academic”, the Chief Justice said any attempt to allow the production of lawyers without efficient control, checks and balances will be rejected irrespective of who is advocating for it.

In her address, the Chief Justice first noted that, “Those of us who have been too long on the General Legal Council, those of us who spent too long on the disciplinary committee, we have cause to worry because the kinds of misconduct are such that there is no way anybody envisaged these categories of misconduct when the Legal Profession Act was being enacted in the 1960s.”

Focusing on her concerns about legal education in Ghana, Justice Sophia Akuffo further stated that, “Those of you lawyers and those of you lecturers who are busy advocating free scale, mass admissions into the professional law course, and mass production of lawyers, be careful what you wish for.”

She further pointed out, “So long as I have anything to do with it, it won’t happen.
“Just like you can’t mass produce doctors and surgeons, Ghanaians must not have mass produced lawyers imposed on them,” the Chief Justice said.

In her brief remarks, the Attorney General and Minister of Justice, Gloria Akuffo noted that “faculty begets the Bar and the Bar begets the Bench.” It was therefore important, she noted, that legal education in Ghana is given the attention it deserves.

“It is very important that we take a hard look at our legal education system in Ghana. The problems of our school of law, and the emerging numbers of universities that offer degrees in law have become a matter of notoriety. Not only do we need a new structure, but we need to restructure the means of instruction,” the Attorney General said.

President of the Ghana Bar Association, Anthony Forson pointed out in his brief remarks that the Bench, Bar and Faculty Conference, which is primarily to foster healthy interactions between the three establishments, has suffered some setbacks in recent years. He however assured the attendees that going forward, the Chief Justice has agreed to make it a calendar item that will be observed just after Easter every year.