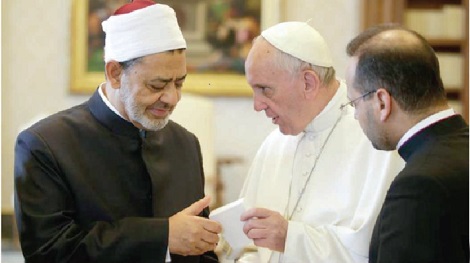 Islamic Conception of Jews and Christians (I)

In a historic meeting on May 23, 2016, the Grand Sheikh of al Azhar University, Ahmed at-Tayyeb, and Pope Francis robustly symbolised Christian-Muslim unity and collaboration in countering religious extremism and terror.

Trusting their discernment, the two religious leaders decided to promote the imperative role of religion in ensuring global peace and posterity. As the head of the most reputable centre for learning the Sunni brand of Islam, which is followed by close to 70 per cent of the world’s Muslim population, the Grand Sheikh of al Azhar University carries a lot of clout in the Muslim World just as the Pope does in the Christian World.

Sheikh at-Tayyeb’s visit to the Vatican was meant to spread peace and coexistence between Muslims and Christians. Minutes before the historic meeting, his deputy, Imām Abbas Shuman, told the crowd of international reporters that at-Tayyeb’s visit aimed to “project true Islam and to correct misunderstandings created by extremist groups”.

The meeting of these two colossus leaders was well-timed as tension between the two most globalised religions is on the rise, breeding immense prejudice rather than breaking the artificial barriers that have been created between them.

The approach the Grand Sheikh of al-Azhar and Pope Francis adopted should expand, especially in the West African sub-region, to educate and involve Muslim clerics and Christian priests in finding ways of fostering coexistence based on respect and trust, not fear and distrust. Imāms and priests should be able to work together to facilitate a platform for an honest and respectful inter-faith dialogue.

Most importantly, the Grand Sheikh emphasised reforms he has initiated in the Egyptian Islamic educational institutions to correct and project concepts that are being misinterpreted by those who use violence and terrorism in the name of Islam.

He said, “al-Azhar is integrating those changes to students in middle and high schools to prevent further misinterpretation of the Qur’anic texts”. Saudi Arabia made similar pledge just around the same period and has since been doing exactly that.

The historiography that encompasses Muslims’ perceptions of Jews and Christians is rich with harmony in classical Islamic sciences. The concept of the People of the Book, Ahlu-l Kitāb, or the legalistic term of Ahl ad-dhimma draws varying interpretations from Muslim historians.

The People of the Book are Jews and Christians who have been living in the Middle East for centuries before the advent of the Islamic faith. In fact, Islam, as the youngest, found itself inserted into the debate between the two older religions.

The Qur’an and the traditions of the Prophet provide a foundation into the cultural and religious views that Muslims rely upon.

These primary sources that form the backbone of Islam, also serve for understanding the world view of Muslims in their daily relation with Jews and Christians.

Therefore, we will begin with the Qur’an, both for what it says about relations between Muslims and the People of the Book, and how it defined the norms to which all later practices had to conform. Further, the Qur’an provides a foundation for constructing Muslim perceptions of Jews and Christians.

This perception, based on religion in many regards, focuses a significant amount of emphasis on linking itself to certain traditions of Judaism and Christianity, while also specifically detailing its differences. It also presents an argument that outlines Islam as the religion that truly understands the message of the one God, shared by the three Abrahamic faiths.

The divine need for a pluralistic human society, characterised by different faiths and laws, is evident in Qur’an 49:13, which reads [O Mankind! Indeed, We created you from a male and a female, and made you into peoples and tribes so that you may ˹get to˺ know one another. Surely the most noble of you in the sight of God is the most righteous among you. God is truly All-Knowing, All-Aware].

As an article of faith, therefore, Muslims are required to […believe in God, the revelation given to us, and to Abraham, Ismail, Isaac, Jacob, and the Tribes, and that revealed to Moses and Jesus, and that given to all the Prophets from their Lord: We make no distinction between one and another of them, and we submit to the only one God] Qur’an 2:136.

For those thinking of flouting these rulings in order to sow discord between God and His messengers by saying [We believe in some but reject others, and wish to take a course midway, they are the true unbelievers, and we have prepared for unbelievers a humiliating punishment] Qur’an 4:150.

Thus, in describing the most pious of Muslims, the Qur’an states, among others, that they are [ … those who believe in the revelations sent to thee (Muhammad), and sent before thy time and in their heart, they believe in the Hereafter] Qur’an 2:4.

At the socio/cultural level, […The food of the People of the Book is lawful for you as your food is lawful for them. And permissible for you in marriage are chaste Muslim women as well as chaste women of those given the Scriptures before you, as long as you pay them their dowries in wedlock, neither fornicating nor taking them as mistresses] Qur’an 5:5.

At the political and security level, [God does not forbid you from showing kindness and acting justly towards those who do not fight you because of religion and do not expel you from your countries, God loves those who act justly] Qur’an 60:8.

However, [God forbids you from making friends with those who initiate war against you because of religion and expel you from your countries. …., and whoever makes friends with them are, indeed, the wrongdoers] Qur’an 60:9.

These last twin verses of the Qur’an present a comprehensive framework that guides Muslims’ relations with non-Muslims (Jews, Christians, polytheists and atheists). The first requires of them to be just in all their dealings with non-Muslims who are not persecuting them because of their faith, and to consistently show them kindness.

The follow-up verse, however, forbids Muslims from showing same courtesies towards those who initiate war against them and strive to frustrate them from practicing their faith. This relational blueprint designed by the Qur’an is a natural reaction expected from any religious community and social group.

What is intriguing is the Qur’anic use of the pronoun “THOSE” in the twin verses, indicating the possibility of the violators in religion to be followers of a known religion, practitioners of a secret religion and people of no religion.

It is imperative to conclude on the laud note, that a just missionary activity by a rivalry religious group aims at winning converts and public discourse of expositions and exhortations aimed at wooing the loyalty of the converts do not constitute acts of provocation or aggression, no matter how ‘uncomfortable’ they sound.

As we demonstrated here last week, Islam looks at religion as a matter of conviction; once the basic facts are provided and explained.

To be continued next Friday

Private sector innovation for the public good: Why NGOs should embrace the…