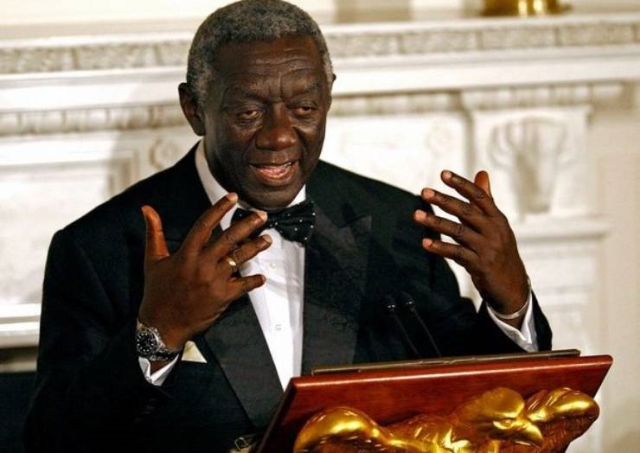 Its a mystery how NPP lost 2008 Elections- JAK

Former President Kufuor says, he finds it mysterious how the New Patriotic Party lost the 2008 elections to the National Democratic Congress in spite of the good performance his party gave the country.

He said a combination of factors, such as the death of his Finance Minister a few months to the 2008 elections, the global economic recession that bit hard at the Ghanaian economy and feet dragging by NPP supporters at the wee hours of the elections may have accounted as some of the reasons NPP lost grip of power.

“It is a mystery. Let me start off with an observation with all respects, democracy is not rationality, common sense or mathematics, former President Kufuor noted.

Speaking in an interview with Kweku Sakyi-Addo on Assase Radio and monitored by theghanareport.com, the former President Kufuor said elections and democracy does not follow logical conclusions, especially when the voter is at play.

If it were so, he said, his party would have won the elections at the first instance, pointing to the fact that the NPP won the first round of the 2008 elections, except, the party did not cross the 50 plus 1 vote to carry the day.

“We all are supposed to have common sense, this is where l get my chalk, this is why l can sleep well at night without fear of anybody.

“So, that common sense, if democracy were that, it should have been a walk over for my party,” he added.

According to the former President, a lot of factors come into play before voters take that step to cast a ball in favor of a candidate.

He argued that it could be an emotional or manipulative journey for the voters.

But regardless of other political parties manipulations, former president Kufuor maintained that the NPP could have won 2008 elections because of its record.

“If l tell you as l sit here l ever thought for a moment that my party will lose the 2008 elections then No,” he stated.

Recounting preceding events to the final day, he said things begun to unfold in ways he could not understand.

First on his list was the death of the then Finance Minister Baah Wiredu.

“When our Minister of Finance died, it hit me, I don’t know if it was an act of God but then the financial crunch was coming, payment of school teachers got delayed.

“So, many things and with the opposition on our necks but even with all these things, if you could remember in the first round, we had 49% so it should have been a done deal,” he recounted.

That was not enough, the party needed just over 2% votes more to crossover to emerge victorious, but that did not happen and the elections had to go into a second round and eventually a third round before the then NDC candidate had to be declared a winner.

His gut feeling, according to the former President, was that Ghanaians were going to reward his party with another victory in 2008 because of the numerous infrastructure projects including the building the Bui dam, and pulling the economy from the Highly Indepted and Poor Countries (HIPC) to a high flying economy among many other initiatives.

Alas, he said that was not to be and stated “that is why l say democracy is not common sense.”

The second issue, as the former president recounted, had to do with party faithfuls threatening to take Ghana’s Electoral Commission to court.

“Our own members had also threatened to take the Electoral Commission to court to restrain it from holding the elections till the wrongs we saw in the second round were corrected.

“Seeing people being beaten up. I don’t want to mention the constituencies and it was only just about 10 days to January 7 where I had to sign off power.

“Well, the court didn’t rule for us but meanwhile the outstanding elections was taking place, they (party faithfuls) boycotted it so that is how power slipped from us,” he explained.

The former president is convinced it was not an outright rejection from the people.

But these events and some other issues may have been a major contributor to the New Patriotic Party’s failure to retain political power in the 2008 elections.

When asked if it was a mistake by the NPP  that 17 other candidates contested in the 2007 party primaries to represent the party in the 2008 elections, he said he would not describe it as a mistake.

“I told you democracy is not common sense, our party, we are democrats and what’s the definition of democracy…because the rank and file of our party tend to be in a way opinionated sometimes, the youngest among us is bound to express himself freely.

“If he doesn’t agree, he will insist on it so the party had gone into primaries to select candidates and those who were not selected said they will go independent,” he added.

This, he explained was the genesis of the problem — the party had to split votes among their own people.

In the 2008 general election, the NPP candidate Nana Akufo-Addo conceded defeat in the closely contested presidential election run-off amidst accusations of vote rigging.

Akufo-Addo polled 49.77% while his arch rival John Evans Atta Mills, the NDC candidate had 50.23% in three rounds of voting.

After the defeat, the party and other political enthusiasts sought to find reasons for the defeat.

An NPP campaign manager Dr. Arthur Kennedy wrote a book on that election, titled ‘Chasing the elephant into the bush’.

In the next presidential election in 2012, John Mahama stood in for then President John Evans Atta-Mills, when died in office in July 2012.  The NDC won but the NPP went to court after the elections to seek to declare the elections rigged.

In an 8-month court room grilling that attracted huge television viewers and a lot of public attention, the Supreme Court finally ruled to uphold the elections.

Then candidate Akufo-Addo conceded defeat after the Supreme Court ruling.

Mahama thus became the first sitting president to lose an election by almost a million votes.