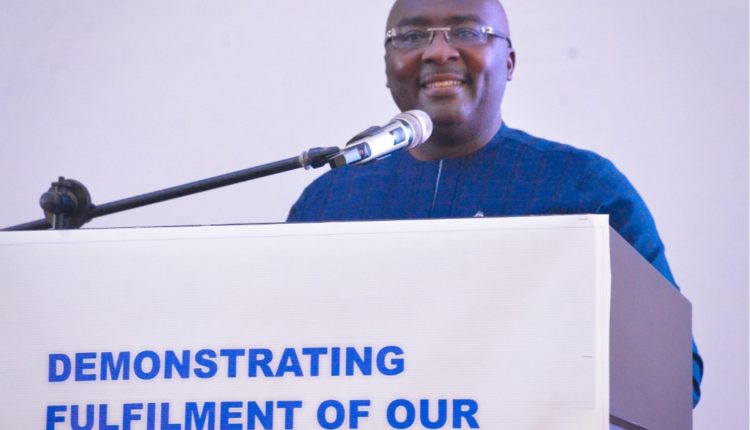 Vice President, Dr Mahamudu Bawumia, on Tuesday, marked the scripts of the Akufo-Addo administration, scoring the government high marks on delivering on its promises.

In December last year, President Nana Addo Dankwa Akufo-Addo scored his government 72 per cent on delivering on the ruling party’s promises. This is against IMANI’s 42 per cent rating.

But at the event to tick the boxes of the government’s more than 300 promises, the Vice-President scored the government 78 per cent—six more than the President gave himself during the December media encounter.

“The data shows that Ghana’s macroeconomic fundamentals are strong. Indeed, the strength of Ghana’s fundamentals was confirmed recently by Moody’s Ratings which changed Ghana’s sovereign ratings from B3 with a stable outlook to B3 with a positive outlook. This is unprecedented for an election year,” he said.

In a presentation at a Town Hall meeting at Kumasi in the Ashanti Region, the Vice President said the combination of prudent macro-and microeconomic policies and programmes implemented by the Akufo-Addo administration over the past three years has strengthened Ghana’s economy and restored her to the path of economic development.

According to him, the Akufo-Addo administration had largely delivered on its manifesto promises, especially on the economy. “Standards and Poors also upgraded Ghana’s sovereign credit rating from B- to B with a stable outlook last year.

This was the first upgrade by S&P for Ghana in 10 years! This is a strong affirmation of the positive assessment by the international financial markets of Ghana’s economic fundamentals.

The seven-year bond issued attracted the lowest coupon rates at 6.375 per cent compared with the 9.25% Ghana had to pay for a similar Eurobond issue in 2016. Those figures, the Vice-President said showed “confidence in the Ghanaian economy by investors.”

“For the first time in a decade, Ghana recorded primary balance surpluses, that is our tax revenues exceeded all government spending, excluding debt service payment, for three years in a row from 2017-2019.

In recent times, the depreciation of the Cedi has attracted concern over the government’s ability to manage the economy, but the Vice President said even the Cedi exchange rate under the NPP (2017-2019) is twice as stable as it was under NDC (2013-2016).

He insisted that the average depreciation of 18 per cent compared to 8.7 per cent during the NPP’s tenure speaks to the ability of the government to better manage the Cedi. “For the NPP to match, the almost four-fold Usain Bolt-like dash of the nominal level of the Cedi, exchange rate under the NDC, the Cedi exchange rate will have to reach some GHc 15 for a dollar,” he said.