Story By The Nation On Oct 30, 2020
Share
Halima Hassan, 30 during the interview at her home in Dololo Midi village, Garissa County on September 19, 2020. PHOTO LUCY WANJIRU

When Halima Hassan was eight months pregnant with her first baby, she went into labour only to have a stillbirth.

“I started contractions at night, which lasted until the following day in the evening,” she recalls. The traditional birth attendant told her the baby was too big to be delivered and had drank amniotic fluid.

She remembers being in labour for very long as they waited for a motorbike to go to the nearest hospital. “After nine hours, the baby was out, but unfortunately dead,” says Halima, a resident of Dololo village in Garissa County.

Although she was in so much pain, she feared going to the hospital on foot as it would have taken her four hours on a bicycle, a move which could have put her in more danger. She decided to give birth at home.

“I buried my child and did not lose hope. I fell pregnant with my second born within one-and-a-half years,” she says. As if fate had conspired against her, she still could not get a vehicle or money to hire a motorbike to take her to the hospital. Considering the distance, she had no option but to give birth at home.

This time around she was lucky and gave birth safely. “Since then, I have given birth to all my eight children at home. I have never stepped in a hospital ward. I tried going to the hospital with my fifth pregnancy, but I did not make. I started the journey at 7 am, but an hour into the walk, I was forced to stop and deliver the baby by the road,” says Halima.

Fortunately, the birth attendant had accompanied her. “I had not carried anything to cover the baby. I was very embarrassed. Well-wishers gave me lesos. I covered my child with one, cleaned myself up with the other and walked back home,” she adds, cringing at the memory.

The journey back home was a nightmare. She was in pain and could not walk properly. Halima reached home after three hours of dragging her feet under the scorching sun. “I would really love to give birth in a hospital, but after such an incident, I decided to be waiting for my babies at home,” says Halima.

She has a designated a corner in her bedroom that acts as her “maternity ward”. “I am still giving birth, but until a hospital is built near us, I will have my deliveries at home,” she tells HealthyNation.

Fatuma Ibrahim, a mother of seven, shares Halima’s sentiments. “Giving birth is like going for a long call. I will give birth anywhere,” she says. “I am not afraid because this is our way of life. I have given birth to all my children at home.”

The only time Fatuma went to the hospital was when she was expecting her fifth child. She started bleeding when she was seven months pregnant and was taken to Garissa County Hospital. Then, she was staying in Garissa town. “I was induced and I gave birth to a bouncing baby boy, who stayed in an incubator for two months. I am glad he made it and I thank God. However, without complications, I would not walk for hours to the hospital just to give birth. I have my attendants just next door,” says the 35-year-old. 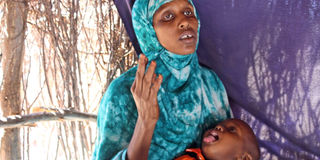 When the mothers give birth at home, the children are not taken for immunisation later and most of them are not vaccinated at birth, exposing them to diseases like polio, pneumonia, meningitis, measles, influenza and hepatitis.

These diseases, long identified as among the biggest health threats in the region, could ravage the nation in the coming years if these children are exposed to their vectors. Health experts say it is not easy to measure the gravity of the situation, but the ripple effect will be felt countrywide. “Vaccination is the safest way to protect children and pregnant women from a long list of serious and potentially life-threatening illnesses,” says Dr Walter Otieno, a paediatrician.

“Vaccines protect children by preparing their immune system to recognise and fight deadly infections. When a child misses a vaccine and there is an attack, for instance, the likelihood of that child going down with the virus is high.”

For Halima and Fatuma, almost all their children were not immunised. Halima only had her last born immunised at four months. “Last month when my child was four months old, the county government sent a mobile clinic for normal outreach, that is when my son was immunised,” says Halima.

This is the way of life for almost all women in Dololo village. Some of them have never stepped into a maternity ward. Some have been lucky not to develop complications that warrant the attention of specialists.

Unplanned out-of-hospital birth is generally assumed to occur for women who have a history of a short pushing phase of labour or are experiencing a precipitate birth. However, women in semi-arid and arid counties in Kenya, with prolonged labour, have no luxury of choosing where to give birth.

Why a woman can give birth at home in 2020 because of how far hospitals are, remains a puzzle.

Giving birth outside a hospital can be risky. Complications can arise and if not managed by a trained health worker, the expectant mother and her baby are put in danger, with injury or death as a probability.

Obstructed labour, infections, haemorrhage, high blood pressure and other complications can be addressed in a hospital or the mother quickly referred to another facility for specialised care.