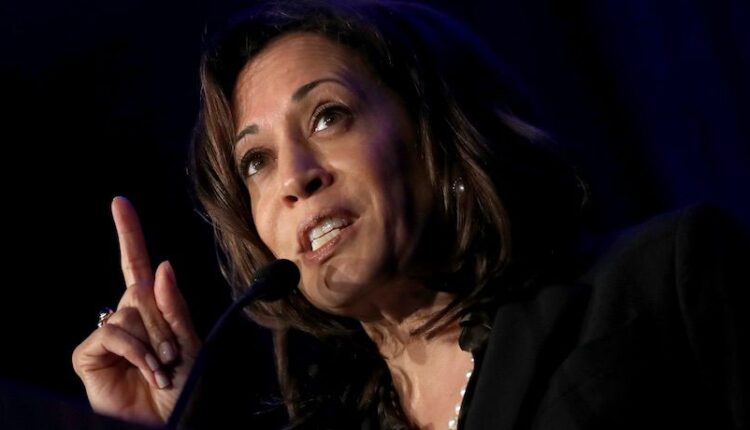 Kamala Harris has accepted her historic nomination as the US Democratic party’s vice-presidential candidate, running with Joe Biden for the White House.

In a speech to her party convention, the first US woman of colour on a major-party ticket assailed President Donald Trump’s “failure of leadership”.

The California senator pledged to speak “truths” to the American public.

Mr Biden and Ms Harris will challenge Mr Trump and his Vice-President Mike Pence in the election on 3 November.

The coronavirus pandemic has forced Democrats to abandon the cheering throngs, fanfare and razzmatazz of the typical party convention in favour of a virtual event of pre-recorded and live speeches.

The grand finale of the four-night conference will see Mr Biden, the Democratic presidential nominee, deliver a speech on Thursday.

What did Kamala Harris say?

“We’re at an inflection point,” she said, speaking live from a largely empty hotel ballroom in Mr Biden’s hometown of Wilmington, Delaware.

Attacking Mr Trump, she continued: “The constant chaos leaves us adrift. The incompetence makes us feel afraid. The callousness makes us feel alone. It’s a lot.

“And here’s the thing: We can do better and deserve so much more.

“We must elect a president who will bring something different, something better, and do the important work.”

Ms Harris – the child of immigrants from India and Jamaica – pledged that she and Mr Biden would revive a country fractured by the coronavirus pandemic and racial tension.

“There is no vaccine for racism,” she said. “We’ve got to do the work.”

She continued: “Donald Trump’s failure has cost lives and livelihoods.”

“Right now, we have a president who turns our tragedies into political weapons,” she added.

President Trump swiftly hit back, tweeting about Ms Harris’ previous attack on Mr Biden over his record on race issues, while they were both rivals for the Democratic White House nomination.

The moment came during a live TV debate last year, though Ms Harris prefaced those remarks by telling Mr Biden: “I do not believe you are a racist.”

Also on Wednesday, former US President Barack Obama launched his most withering direct attack yet on Mr Trump, accusing his Republican successor of treating the White House like “one more reality show”.